Data: Tesla Driver Had Hands Off Wheel for 80 Seconds Before Crash

In a statement, Tesla said that drivers are repeatedly warned to keep their hands on the wheel and maintain control of their vehicle at all times, even when Autopilot is engaged. 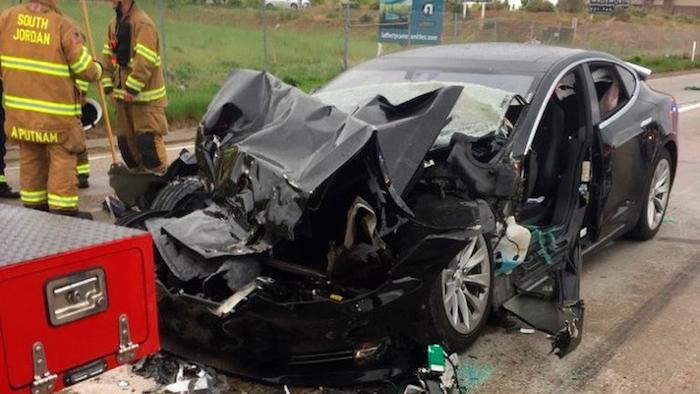 In this Friday, May 11, 2018, file photo released by the South Jordan Police Department shows a traffic collision involving a Tesla Model S sedan with a Fire Department mechanic truck stopped at a red light in South Jordan, Utah. The driver of a Tesla electric car that hit a Utah fire department vehicle over the weekend says the car's semi-autonomous Autopilot mode was engaged at the time of the crash. Police in the Salt Lake City suburb of South Jordan said Monday, May 14, 2018, the driver also said in an interview that she was looking at her phone before the accident. The 28-year-old woman broke her foot when her car hit a fire truck stopped at a red light while going 60 mph (97 kph).
South Jordan Police Department via AP, File

SALT LAKE CITY (AP) — A Utah driver turned on the semi-autonomous functions of her Tesla vehicle and then didn't touch the steering wheel again for 80 seconds before slamming into a firetruck stopped at a red light last week, a summary of data from the car released Wednesday showed.

The National Highway Traffic Safety Administration has sent its special crash investigations team to the state, the agency said as details about the Friday evening crash became public Wednesday.

According to South Jordan police's summary of technician findings, the 28-year-old driver had repeatedly enabled and disabled the Autopilot features of her Tesla Model S throughout the course of her drive. She took her hands off the wheel more than a dozen times, twice for more than a minute each.

The driver re-enabled Autopilot 1 minute and 22 seconds before the crash, let go of the wheel 2 seconds later and then didn't touch the wheel again before hitting the truck at 60 mph (97 kph). She had previously told police that she had engaged the system and was looking at her phone to compare route maps when the accident occurred.

The driver, who suffered a broken foot in the accident, has not been identified. She was issued a traffic infraction for failing to keep proper lookout.

The driver of the firetruck was checked for whiplash injuries but did not go to the hospital.

In a statement Wednesday, Tesla said that drivers are repeatedly warned to keep their hands on the wheel and maintain control of their vehicle at all times.

"Tesla has always been clear that Autopilot doesn't make the car impervious to all accidents," the statement said. South Jordan police reiterated that drivers of semi-autonomous vehicles must remain alert and in control of the vehicle at all times.

Tesla's Autopilot relies on a system of radar, cameras with 360-degree visibility and sensors to detect nearby objects and perform basic functions such as parking and steering.

The features include emergency braking, which Tesla advertises as being able to "detect objects and automatically apply brakes to help avoid or lessen impact." Tesla says the system is not designed to avoid a collision and warns drivers not to rely on it entirely.

It's unclear if that system activated before the Utah crash. According to the summary released by police, the driver pressed on the brake herself "fractions of a second prior to the crash" and the vehicle had not slowed down from the speed she had set for cruise control.

The Utah accident is the latest incident involving an autonomous or semi-autonomous vehicle that has prompted scrutiny from federal regulators.

The NHTSA and the National Transportation Safety Board are investigating a March crash involving a Tesla Model X in California where the driver was killed. The Autopilot system was engaged in that crash.

Also in March, an Arizona pedestrian was killed by a self-driving Uber car with a backup driver behind the wheel.

The NTSB said it has not opened an investigation into the Utah crash.