The company could pay more than $20 million under the proposal. 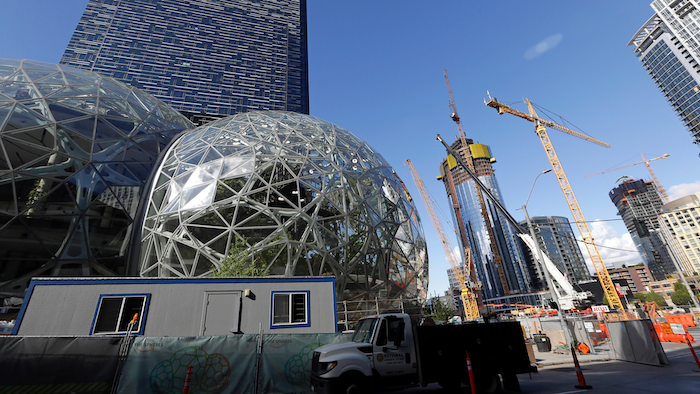 In this Wednesday, Oct. 11, 2017, file photo, large spheres take shape in front of an existing Amazon building, behind, as new construction continues across the street in Seattle. Amazon said Wednesday, May 2, 2018, it is pausing construction on a new high-rise building in Seattle while it awaits the outcome of a city proposal to tax worker hours. The Seattle City Council has been weighing a proposed "head tax" on high-grossing businesses as a way to raise about $75 million a year for affordable housing and homelessness services.
AP Photo/Elaine Thompson, File

SEATTLE (AP) — Amazon has halted construction planning on a new high-rise building near its headquarters while it awaits the outcome of a Seattle city proposal to tax worker hours.

The Seattle City Council is considering a "head tax" on high-grossing businesses to raise about $75 million a year for affordable housing and homelessness services.

Supporters say businesses that have benefited most from Seattle's economic boom should help solve urgent problems that have come with it, such as soaring rents and a spike in people living on the streets.

Amazon vice president Drew Herdener said in a statement Wednesday that the Seattle-based online retailer has put on hold construction planning for a 17-story tower, pending a council vote on the tax. In addition, he said the company is evaluating options to sublease all space it recently leased in another downtown skyscraper under construction.

In Seattle, the proposed head tax is roughly 26 cents per employee hour, or roughly $540 a year per worker. By 2021, the tax would switch to a .07 percent tax on the business payroll.

At a council committee meeting Wednesday, Councilmember Kshama Sawant said it's critical that "we not accept this extortion."

She called the tax "pocket change for these businesses" and said "Amazon is perfectly capable of paying that."

Last month, Amazon reported that its first-quarter profit more than doubled from a year ago, fueled by the growth of online shopping and the cloud-computing service it provides to businesses and government agencies. Overall revenue jumped 43 percent to $51 billion.

The company earned $1.63 billion in the three months ending March 31. It's the second time Amazon's quarterly profit has topped $1 billion. In the previous quarter, which included the busy holiday shopping season, it had a profit of more than $1.8 billion.

Many social service workers and others supported the tax Wednesday, saying the city needs to add affordable housing and address the wealth disparity.

Councilmember Lorena Gonzalez, a co-sponsor of the tax measure, tweeted her support Wednesday morning saying, "To address the massive humanitarian crisis our city is experiencing, we MUST create sustainable revenue sources to fund effective solutions that will get our Seattle residents off the streets."

Businesses have been pushing back on the idea since it first surfaced last year. The City Council narrowly rejected a smaller tax proposal last fall.

"The City of Seattle has abundant tax resources today because many locally based businesses have chosen to grow here. That's why we urge the City Council to prioritize those resources — including over $700 million in taxes paid by business each year — before pursuing new revenue, and work with regional partners to develop a coordinated plan that will significantly reduce homelessness."

Other businesses said that they operate on tight margins of 1 percent or so and won't be able to raise prices on consumers.

"I'm deeply concerned about the impact this decision will have on a large range of jobs," Seattle Mayor Jenny Durkan said in a statement Wednesday.

Durkan said the city must urgently address homelessness and the affordability crisis. She said she'll bring together councilmembers and other leaders to find common ground.