Companies could be taxed between $9 and $149 per employee. 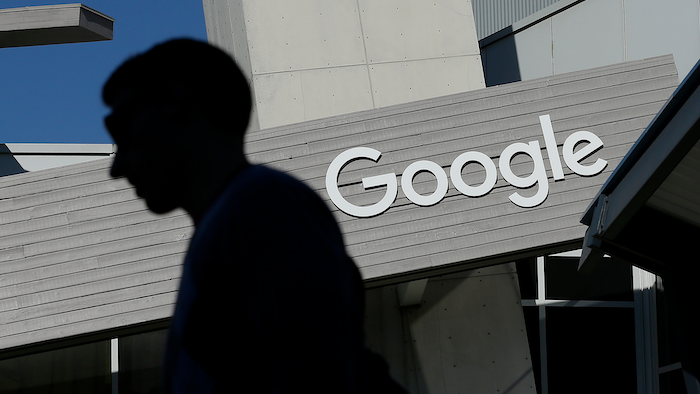 In this Nov. 12, 2015, file photo, a man walks past a building on the Google campus in Mountain View, Calif. Voters in a Northern California city will decide whether Google and other tech companies should help pay for the traffic headaches and other problems that have arisen as their workforces have swelled during the past decade. The city council in Mountain View, California, voted Tuesday, June 26, 2018, to place a measure on the November ballot asking residents to authorize taxing businesses between $9 and $149 per employee.
AP Photo/Jeff Chiu, File

MOUNTAIN VIEW, Calif. (AP) — Voters in Google's Silicon Valley hometown will decide whether the search engine leader and other tech companies should help pay for the traffic congestion and other headaches resulting from mushrooming workforces.

The City Council in Mountain View, California, voted Tuesday to place a measure on the November ballot asking residents to authorize taxing businesses between $9 and $149 per employee, The Mercury News in San Jose, California, reports Wednesday.

The move comes weeks after Seattle leaders succumbed to strident opposition from online retailer Amazon and repealed a tax on large companies aimed at alleviating homelessness.

If the Mountain View measure passes, the tax could generate about $6 million a year for the city, with $3.3 million coming from Google alone. The bulk of the money would pay for transit projects that are badly needed to ease gridlock for workers and residents, and 10 percent would go toward affordable housing and homeless services.

Mountain View, a suburb of 80,000 about 40 miles (65 kilometers) south of San Francisco, is known for recreational vehicles that line some of its streets. The vehicles house lower-income workers unable to afford monthly rents that can easily top $3,000.

"Why shouldn't one company pay the majority of the business tax if they are the one company that strains city resources the most?" Jesse Cupp said, a Mountain View resident who introduced himself to the council as a Google shareholder who favors a progressive tax.

"Their impact on housing and traffic is disproportionately large compared to all other companies in the city, and they should cover the cost."

Google had no comment on the proposal Wednesday and so far hasn't taken a public position on the proposal in the city that has been its home for most of its 20-year history. Representatives of the Silicon Valley Leadership Group and Mountain View Chamber of Commerce spoke against the tax Tuesday.

One possible reason that Google is reacting differently is that it wouldn't be hit as hard as Amazon would have been had Seattle's tax been approved.

After initially seeking a $500 annual tax per Amazon employee, Seattle lowered it to $275 per worker. Mountain View's proposal would tax Google $150 annually for each of its roughly 23,000 employees, resulting in an estimated bill of $3.3 million in the first year. Amazon employs nearly twice as many people in Seattle, meaning it would have been charged more than $12 million annually.

Other circumstances also would make it difficult for Google to explain why it can't afford to pay $3.3 million — or even more — to help support its hometown.

Last year, the company was hit with a $2.7 billion penalty in Europe after regulators there concluded Google had improperly manipulated its search engine to favor its own services and boost its profits. The proposed tax in Mountain View is also something that Google could easily afford. It takes Google less than an hour to generate revenue of $3.3 million, based on its sales last year.