The self-driving vehicles on display showcase South Korea's prowess in both automotive and telecoms technology. 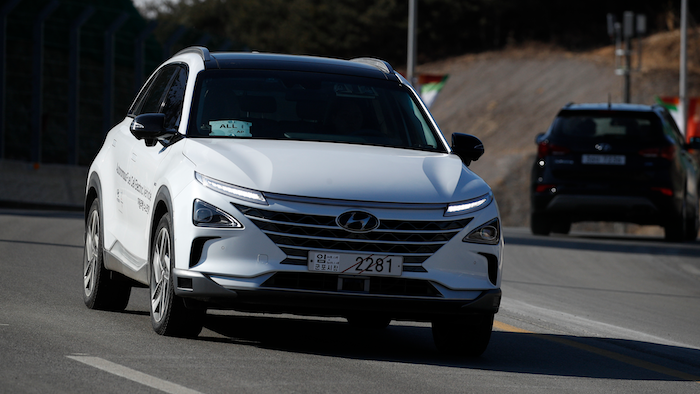 In this Monday, Feb. 12, 2018, photo, Hyundai's autonomous fuel cell electric vehicle Nexo is driven along a road near the Pyeongchang Olympic Stadium in Pyeongchang, South Korea. At Pyeongchang Winter Olympic Games, there are two futures of self-driving vehicles in two different Olympic venues by two different companies. In a reminder of a proxy war between automakers and tech companies, Hyundai and KT have negotiated over the exclusive right to use the buzzword.
AP Photo/Jae C. Hong

PYEONGCHANG, South Korea (AP) — There's a competition at the Pyeongchang Winter Olympics that has nothing to do with sports, and plenty to do with jousting between automakers and tech companies over autonomously driving vehicles.

South Korea's largest automaker and a local telecom firm haggled for months over who would get to claim the exclusive right to label its vehicle as "autonomous." In the end, Hyundai Motors rolled out an "autonomous" sedan while KT Corp.'s self-driving bus was christened the "5G Bus."

The self-driving vehicles on display at the Winter Olympics are showcasing South Korea's prowess in both automotive and telecoms technology.

They took to the roads only after a sponsorship battle over whether such vehicles should be considered a form of transportation or a new kind of internet-connected device, like smartphones.

Each Olympic corporate sponsor gets exclusive marketing rights in its own industry, so a blurring of boundaries between industries can lead to friction, said Kang Joon-ho, a sports marketing professor at Seoul National University. "It's not clear whether we should see self-driving cars as vehicles or software, so it's unclear which sponsorship category they belong to."

In the end, a compromise was worked out.

Hyundai Motor Co., the local sponsor for the transport category and the world's fifth-largest auto group, is seeking to dispel its image as a latecomer in autonomous driving. In Pyeongchang, it also is getting a jump on Japanese rivals that are preparing to deploy self-driving cars at the 2020 Tokyo Olympics with its five autonomous Nexo fuel-cell cars. They are navigating without direct human control within a range of about 7 kilometers (4 miles) from the Olympic stadium in the mountainous town.

In a one-time test before the opening ceremony for the games, Hyundai had the Nexos drive 190 kilometers (118 miles) of highways from Seoul to Pyeongchang. The vehicles passed through toll gates and navigated junctions and tunnels without human controls or interruptions.

It was the culmination of years of preparation, and development of 3D maps by the government.

"South Korea started late but we are at a level where we can pull off autonomous driving even in complicated, difficult situations," said Kim Jin-hoo, a deputy director at the transport ministry. "We hope the event has helped ease public fears toward self-driving cars and piqued interest since the government aims to see self-driving cars commercialized by 2020."

Hyundai is partnering with U.S.-based self-driving technology startup Aurora Innovation to develop self-driving vehicles that can operate without human input in most conditions, aiming to begin sales by 2021. Analysts expect Hyundai to launch self-driving taxis or ride-hailing services by then.

As the local sponsor for wireless networks, KT, formerly state-owned Korea Telecom, is focusing on self-driving cars becoming the new data-guzzling devices of the future.

Self-driving cars consume enormous amounts of data as sensors and chips monitor road conditions and analyze them in real time. KT, along with Intel and Samsung Electronics, has built 5G networks as a trial service in the Olympic towns to handle those mountains of data.

Since it has the telecoms, not automotive sponsorship, for appearances' sake KT agreed not to present its two "5G connected" buses to the media as driving unmanned, even though that's how they are operating in the seaside town of Gangneung, where Olympic ice hockey and skating matches are underway.

Leading global telecom carriers plan to roll out 5G networks in 2020. Such networks process data about 100 times faster than current fourth-generation wireless networks, a speed that enables users to download feature-length movies in a matter of a couple of seconds.

KT plans to begin 5G services — the bus is one example — across South Korea in 2019. Despite its sponsorship rivalry with Hyundai, it also is providing 5G data networks to the Nexos, whose rear seats are outfitted with 5G entertainment services.

The 5G connected buses are like giant moving smartphones, with passenger seat windows made of transparent displays instead of traditional glass that serve as screens for watching movies or displaying fictional landscapes, instead of just the view outside the bus.

While some riders might prefer just to gaze at the landscape, Kim Hyung Joon, a senior vice president at KT, says the technology will liberate drivers to relax and watch movies.

"That way, cars will become very much similar to mobile devices that are connected all the time and consume data like a smartphone," Kim said.

Unfortunately for international visitors, seats on the connected 5G buses that will be operating through Feb. 22 are all already booked solid.

KT also is showing off 5G tablets and ways to experience winter sports through virtual reality and other 5G services at Olympic venues and at booths in Gangneung and Seoul.