The initiative is bringing together top scientists, engineers, and chefs to build a piece of meat from plants. 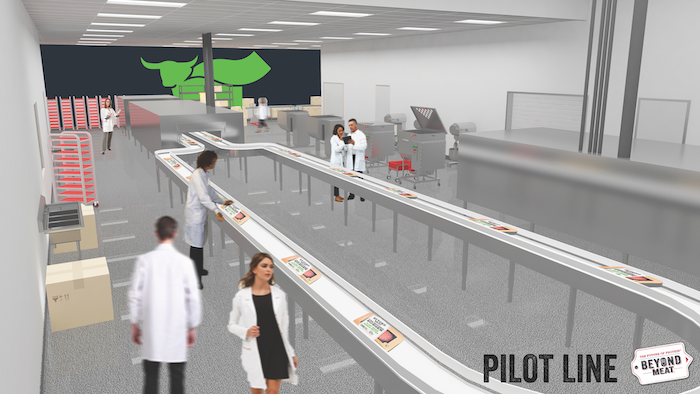 Beyond Meat’s new pilot line will have the capabilities to test and produce limited runs of products, nearly doubling the Company’s current pilot production capacity and significantly reducing the time to get products to market.
Beyond Meat

The new facility will house more than 100 employees, and will be the new home to Beyond Meat’s Manhattan Beach Project, the company’s on-going initiative to bring the best scientists, engineers, food technologists, chefs, and researchers together in service to a single goal: perfectly build a piece of meat directly from plants.

The center is seven-times the size of the existing facilities and will serve as the foundation of Beyond Meat’s commitment to innovation through accelerated experimentation, learnings, and progress toward the goal of building plant-based meat that is indistinguishable from its animal-based equivalent.

Given the company's mission-driven focus includes improving human health, it’s not surprising that 90% of the R&D staff come from biomedical research.

Re-imagining the use of existing imaging technologies toward a better understanding of the complexity of meat, and applying this knowledge to rebuild meat from plant material, is a key focus for the team.

Complementing the efforts on the R&D side will be a gourmet kitchen to host chefs and culinary experts, as well as a formal sensory space for real-time consumer testing and panels.

The Beyond Burger is the world's only burger that looks, cooks, and tastes like ground beef from cows, but is made entirely from plants, without GMOs, soy, or gluten.

Since its debut in 2016, more than 11 million Beyond Burgers have been sold. Along with being available in the meat case at 5,000+ grocery stores, it is also sold on the menu at more than 5,000 restaurants nationwide including TGI Fridays, BurgerFi, Bareburger, & Epic Burger.