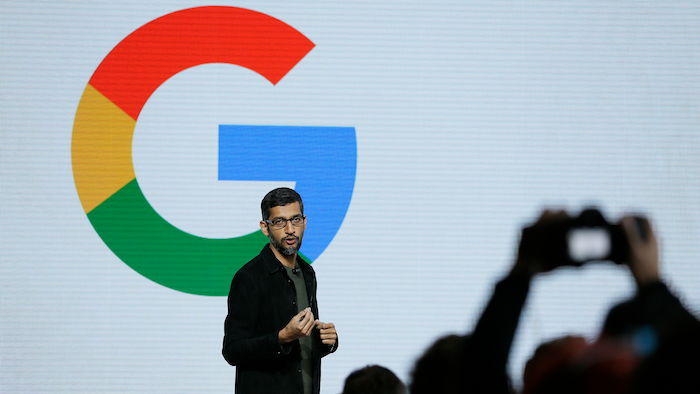 In this Tuesday, Oct. 4, 2016, file photo, Google CEO Sundar Pichai speaks during a product event in San Francisco. Pichai has declared artificial intelligence more important to humanity than fire or electricity. And yet the search giant is increasingly having to deal with messy people problems: from the need for human checkers to catch rogue YouTube posters and Russian bots to its efforts to house its burgeoning workforce in pricey Silicon Valley.
AP Photo/Eric Risberg, File

The company has vowed to employ thousands of human checkers just to catch rogue YouTube posters, Russian bots and other purveyors of unsavory content. It's also on a buying spree to find office space for its burgeoning workforce in pricey Silicon Valley.

For a company that built its success on using faceless algorithms to automate many human tasks, this focus on people presents something of a conundrum. Yet it's also a necessary one as lawmakers ramp up the pressure on Google to deter foreign powers from abusing its platforms and its YouTube unit draws fire for offensive videos , particularly ones aimed at younger audiences.

Some of the extra workers this year will be part of Google's pledge to have 10,000 people across the company snooping out videos and other material that violate the company's policies — but which computers can't catch on their own. That program will lead to what Google calls "significant growth " in personnel.

Google will take on even more workers in the current quarter now that it has closed its $1.1 billion purchase of part of hardware maker HTC, bringing onboard the 2,000-plus engineers who worked on the Pixel smartphone line.

On Thursday, Pichai spoke bullishly about content-checkers hiring, saying the investments now set the company up to capture growth in the future — in the same call with investors that he touted self-driving vehicles developed by Alphabet's Waymo unit, which aim to do away with human drivers entirely.

For instance, Pichai said he sees consumers increasingly watching YouTube videos on connected TVs in the living room, a lucrative segment of growth for the digital video advertising that helps power Google's growth.

After controversies over YouTube stars who made anti-Semitic comments or showed video of someone who had apparently died by suicide, Google has tightened its standards . It has limited which YouTube channels can serve up ads; vowed to manually review every video in its most popular channels for 18-to-34-year-olds; and will pay outside companies to ensure that brands don't have their ads turn up next to unsuitable videos.

"While there have been some concerns, we're working really hard to address them and respond strongly," Pichai said.

Some analysts aren't so sure. Collin Colburn, an analyst with market researcher Forrester, wonders how much of the recent changes are just window dressing at a company for whom hiring thousands of people amounts to little more than pocket change.

"I wonder if it's more of a move of optics rather than practicality," Colburn said, noting Google's "massive" double-digit revenue growth and cash hoard of $102 billion.

Revenue at Google parent Alphabet rose 24 percent from a year ago to $32.32 billion. After subtracting advertising commissions, revenue was $25.87 billion, exceeding Street forecasts of $25.65 billion. But the company swung to a $3 billion loss from a $5.33 billion profit a year earlier, reflecting the recent federal tax overhaul.

Google's growing workforce has the company on a real-estate tear.

It recently opened up offices in Austin, Texas; Ann Arbor, Michigan; Boulder, Colorado; and is planning to open offices in Detroit. It broke ground in November on a huge office building in the heart of London, home to its DeepMind artificial intelligence unit, that will come complete with a rooftop running track.

Near its current headquarters, construction is underway on two futuristic dome-like structures infused with natural light, brimming with solar panels and set to open in late 2019. Google is negotiating with the city of Mountain View to add 10,000 housing units, many of which will likely be home to employees known as "Googlers."

Pichai said the company intends to hire "thousands of people across the U.S." this year, build or open five new data centers, and make "significant investments" in nine states.