The prototypes form a tightly packed row of imposing concrete and metal panels.

The prototypes form a tightly packed row of imposing concrete and metal panels, including one with sharp metal edges on top. Another has a surface resembling an expensive brick driveway.

Companies have until Oct. 26 to finish the models but Border Patrol spokesman Theron Francisco said the last two came into profile, with crews installing a corrugated metal surface on the eighth model on a dirt lot just a few steps from homes in Tijuana, Mexico.

As the crews worked, three men and two women from Nepal, ages 19 to 30, jumped a short rusted fence from Tijuana into the construction site and were immediately stopped by agents on horseback.

Francisco said there have been four or five other illegal crossing attempts at the site since work began Sept. 26.

The models, which cost the government up to $500,000 each, were spaced 30 feet (9.1 meters) apart. Slopes, thickness and curves vary. One has two shades of blue with white trim. The others are gray, tan or brown — in sync with the desert.

Bidding guidelines call for the prototypes to stand between 18 and 30 feet (5.5 and 9.1 meters) high and be able to withstand at least an hour of punishment from a sledgehammer, pickaxe, torch, chisel or battery-operated tools.

Features also should prevent the use of climbing aids such as grappling hooks, and the segments must be "aesthetically pleasing" when viewed from the U.S. side.

The administration hasn't said how many winners it will pick or whether Trump will weigh in himself.

"I'm sure they will engage in a lot of tests against these structures to see how they function with different challenges," U.S. Rep. Bob Goodlatte, a Virginia Republican who chairs the House Judiciary Committee, said Tuesday after touring the construction site.

Trump has asked Congress for $1.6 billion to replace 14 miles of wall (22.4 kilometers) in San Diego and build 60 miles (96 kilometers) in Texas' Rio Grande Valley, the busiest corridor for illegal crossings.

Here's a rundown of companies building prototypes, their headquarters and value of their contract. Two are making one concrete prototype and another using other materials.

Its tan concrete wall is thick at the bottom and narrows considerably toward the pointed top. The other, also tan, has metal poles on the bottom, a metal plate in the middle, and concrete block on top.

The general construction company founded in 1983 says its projects include U.S. embassies in Beijing and Kabul, Afghanistan, terminals at Houston's George Bush International Airport and renovations to the Denver Mint.

Its models are a darker brown than other prototypes and topped by round beams. Its concrete panel has a plain face; its metal one has a corrugated surface.

The 53-year-old company has worked in a wide range of projects, including a Toyota plant in Blue Springs, Mississippi, a county jail in Olmito, Texas, a marine terminal in Jacksonville, Florida, and a power plant near Panama City, Florida.

It's the only prototype to be built entirely on site — as opposed to being hauled in. Its tan surface gradually narrows toward the top, like a long triangle.

Part of conglomerate Fisher Industries, the company produces sand, gravel and other products for roads, dams and large public works projects. The company is active is 12 western states.

The gray surface of the U.S. side is stamped with patterns of different-sized bricks, like a driveway or sidewalk at an upscale home. There is a steel plate on top with prongs that feature at three metal spikes, resembling an agave plant.

Two companies were selected to build walls made of materials other than concrete.

Its gray metal columns are topped with a large metal plate. The small, Hispanic-owned company counts the Homeland Security, Defense and Interior departments among its largest customers.

ELTA is a large Israeli defense contractor owned by state-run Israel Aerospace Industries. The company, which makes radar and other gear, opened its new U.S. headquarters in Maryland in May. 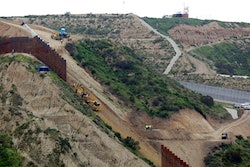 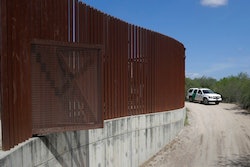 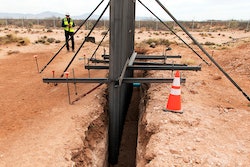 Border Wall to be 'Serious Structure'