A green tarp hanging on a chain-link fence blocked views of the work, which is expected to last 30 days. 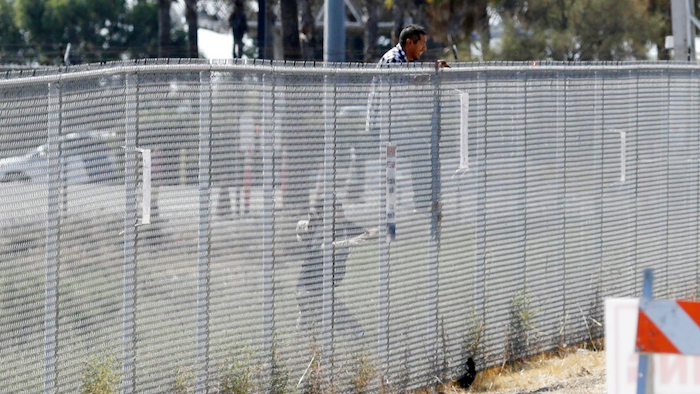 A man is detained by Border Patrol officials as he tries to climb a fence after breaching border fencing separating San Diego from Tijuana, Mexico, Tuesday, Sept. 26, 2017, in San Diego. The man, who said he was from Chiapas, Mexico, was detained by agents as they prepared for a news conference to announce that contractors have begun building eight prototypes of President Donald Trump's proposed border wall with Mexico.
AP Photo/Gregory Bull

Construction of eight models in a remote area of San Diego is about three months behind schedule, held up by losing bidders whose protests were eventually denied. A green tarp hanging on a chain-link fence blocked views of the work, which is expected to last 30 days.

Customs and Border Protection may pick several winners, or none. Roy Villarreal, acting chief of the Border Patrol's San Diego sector, said another contractor will evaluate each model, which will be up to 30 feet (9 meters) high and 30 feet long.

"It may not result in a singular winner. It may be a combination of designs being implemented," Villarreal told reporters next to existing border fencing.

As agents prepared for the news conference, a Mexican man breached the fence, cut his hand and was arrested.

The construction site is about 2 miles (3 kilometers) east of San Diego's Otay Mesa border crossing at the end of steel-mesh fence that runs from the Pacific Ocean.

San Diego police and the county sheriff's department have helped set up a "free speech zone" nearby for people to demonstrate. Villarreal said he knew of no organized plans to protest.

Bidding documents say four of the prototypes are to be solid concrete and four are to be made of "other materials." Trump said Friday that the wall should be see-through, apparently at odds with the initial instructions for solid concrete.

Villarreal said the concrete designs would be built with openings to allow agents to see across the border.

The administration faces several federal lawsuits in San Diego that seek to block the prototypes and plans to replace existing barriers in California.

A complaint filed last week by California Attorney General Xavier Becerra, a Democrat, largely mirrors two others by environmental advocacy groups that allege the administration overstepped its authority to speed up construction of the wall.

At issue is a 2005 law that gave the Homeland Security secretary broad powers to waive dozens of laws for border barriers, including the National Environmental Policy Act, Clean Air Act and Endangered Species Act. The lawsuits say that authority has expired.

The administration has not commented directly on the lawsuits. It has issued two waivers since August, the first ones since 2008, on grounds of national security. Both waivers are in California, including one that covers the site of prototype construction.

Funding to extend the wall beyond its distance of 654 miles (1,046 kilometers) is in doubt. Democrats have balked at Trump's $1.6 billion request to replace 14 miles (22 kilometers) in San Diego and build 60 miles (96 kilometers) in Texas' Rio Grande Valley, the busiest corridor for illegal crossings.

Border Wall to be 'Serious Structure'