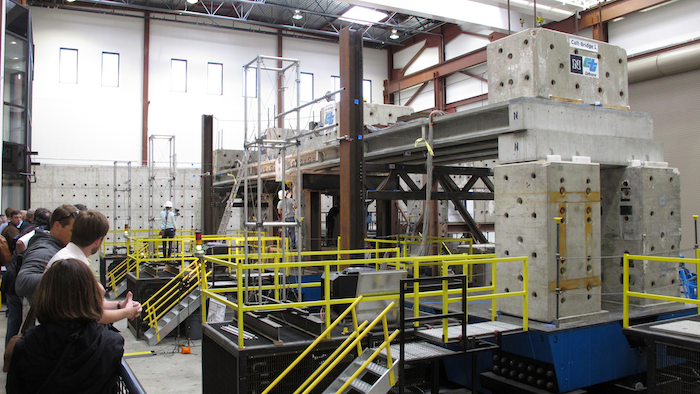 University of Nevada, Reno engineers performed the experiments on a giant "shake table" to simulate violent motions of an earthquake to rattle a 100-ton (91-metric ton), 70 foot (21-meter) bridge model to determine how well it would hold up.

The tests, conducted a day after a big quake struck Mexico, shook large concrete columns and beams back and forth for about 30 seconds at a time, displacing some nearly a foot before returning largely to their original spot.

Graduate students measured and marked indications of tiny fractures but no major structural damage was observed in the initial review of the experiments.

"The bridge has done better than we expected," said Saiid Saiidi, a professor of civil and environmental engineering who served as the project leader. He's done related research for more than 30 years.

Bridges are already designed not to collapse in earthquakes but often are unsafe for travel after big quakes. He said the designs that were tested employed special types of connectors to link prefabricated bridge parts, including ultra-high performance concrete.

"Earthquakes by themselves don't kill people — it's the structures," Saiidi said.

The elements have been tested on their own but never before combined in a bridge model subjected to realistic earthquake motions, like the 1994 Northridge, California quake. Wednesday's test inside the University of Nevada's Earthquake Engineering Laboratory simulated activity of a quake as large as magnitude 7.5.

Some design work by the engineers has been incorporated into a highway off-ramp under construction in Seattle. It's the first bridge in the world that uses flexible columns and reinforcement bars made out of a metal alloy with titanium that bends and then springs back into shape when quakes hit.

Among other things, the innovative connectors allow for prefabricated concrete and other materials to be attached to an existing bridge foundation so as to speed repair and reconstruction

Part of the research centers on a so-called "pipe pin" connection developed by the California Department of Transportation's bridge designers for use in connecting certain beam interfaces in bridge construction.

The University of Nevada's Earthquake Engineering Lab is the largest of its kind in the United States.

The latest project is funded by the California Department of Transportation, which currently is developing plans for 10 pilot projects based on the developing bridge connector technology.

"This study today is going to allow them to make observations of those designs," Saiidi said.