They detects the stress and strain on bridges used by tanks. 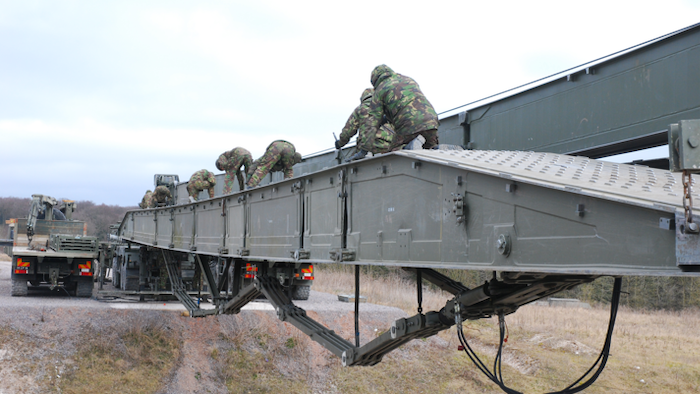 The deployment of a general support bridge.
BAE

BAE engineers are testing an integrated Bluetooth and sensing technology that reports the remaining service-life of military bridging systems.

The new ‘fatigue monitoring’ technology continuously detects the stress and strain on bridges designed to be used by tanks such as the more than 60 ton Challenger 2. The Challenger 2 is the British Army’s Main Battle Tank that is scheduled to be in service until 2035 (view photos in gallery).

The sensors wirelessly transmit data to a handheld device, allowing soldiers to easily assess the health of the bridge.

Without the use of an automated fatigue monitoring system, the remaining service life of rapidly deployable military bridges is based on manual records and is difficult to judge, resulting in bridges being retired early or overused. The new technology uses a series of sensors fitted to the bridge components which undergo the most strain and records around a hundred strain readings per second to monitor.

A computer-analysis then gives a component-by-component overview of bridge health. The fatigue monitoring technology gives military engineers the peace of mind that their bridges remain healthy, even on extended military campaigns where bridges can remain in place for many months.

The system is being tested by BAE's military bridging team. The 50-person team is based in Telford, UK and operates Europe’s most advanced Bridge Test Facility.

The facility simulates thousands of bridge crossings by a variety of wheeled and tracked vehicles, allowing BAE Systems to assess bridge performance using comprehensive data records on how the various components perform.

BAE Systems designed and manufactured the British Army’s rapidly deployable military bridging system - BR90 in the 1990s. BR90 comprises 74 bridging systems and can be used in a variety of configurations, adding up to a total of 8.5km of bridge trackway, and provides the most rapidly deployed and flexible gap crossing capability in the world. Another variant of the bridge can be used to span gaps greater than 60m.

BAE is now developing and testing a next generation Modular Bridging System to be even more agile and reliable.