New York tries to make itself a legitimate rival to Silicon Valley. 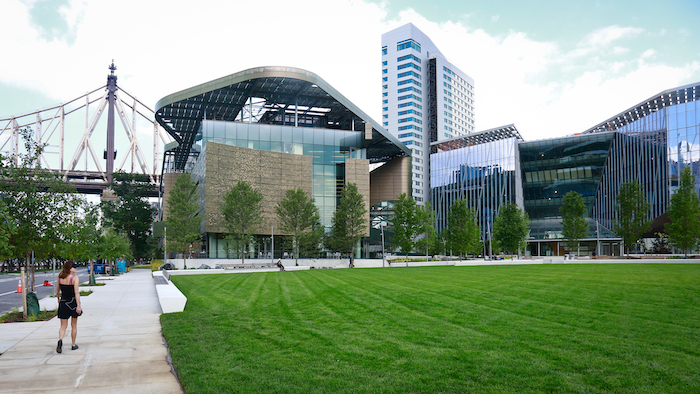 NEW YORK (AP) — The city's quest to make itself a legitimate rival to Silicon Valley as a high-tech hub has long bumped up against some harsh realities, among them the fact it hasn't had a top-tier technology school pumping out the next generation of entrepreneurs and engineers.

A potential answer to that problem, a new technology-oriented graduate school called Cornell Tech, cuts the ribbon Wednesday on the first phase of its new campus on an island in the East River.

The collaboration between Cornell University and the Technion-Israel Institute of Technology, built with the help of hundreds of millions of dollars from philanthropies and from the city, has just 250 master's degree students and 50 doctorate students taking classes this fall. But officials hope to ramp up to 2,000 students by the time the campus is fully developed.

Part of the concept is to promote close ties between academia and the startup economy, officials said.

"Cornell Tech presented an opportunity that is almost unheard of today, to build a new type of academic program and a new type of campus from scratch," Martha Pollack, the computer scientist who was named the 14th president of Cornell University this year, said in a speech to a business group.

She called the school "the first of its kind campus, built for the digital age."

The first three buildings of a 12-acre campus on Roosevelt Island are opening Wednesday after a fledgling Cornell Tech program spent the past four years as a rent-free tenant at a Google office building in Manhattan.

The campus was born from a competition held by New York City in 2011, backed by independent then-Mayor Michael Bloomberg, a billionaire who made his fortune selling innovative data terminals to Wall Street.

Students in fields including engineering, computer science, business and health tech are living this fall in a newly opened 26-story residence hall with sweeping views of Manhattan on one side and Queens on the other.

Cornell Tech's main academic building, called the Bloomberg Center, looks far more like a tech company than a university. Professors and researchers type away at laptops in the open-plan office. If they want privacy for a meeting they can repair to a huddle room.

There are no book-lined faculty offices, nor, it appeared during a recent visit, any books at all.

"It's a real shock to the system for those of us who come from academia," Pollack said. "You can't imagine going to a faculty member and saying, 'No, you're not going to have an office. You're going to be in an open floor plan.'"

The third Cornell Tech building, called the Bridge, is owned by developer Forest City Ratner and will be shared by the school and commercial tenants including, so far, Citigroup and Italian chocolate maker Ferrero, the maker of Nutella.

Pollack said the arrangement means that "our students and researchers will interact with startups, entrepreneurs, investors and established companies all in the pursuit of commercial innovation."

The Technion, Israel's oldest university, is responsible for two of the seven master's programs Cornell Tech offers. The programs in health tech and connective media are part of the Jacobs Technion-Cornell Institute, which also hosts a post-doctoral startup program for graduates to transform their research into new companies.

The Technion's president, Peretz Lavie, said he was flattered when Bloomberg invited him to enter the competition for a New York campus but he knew that the Technion would need an American partner. The Cornell-Technion marriage works because the two universities share similar educational missions, Lavie said.

"It's a match made in heaven for many reasons," he said in a telephone interview.

Bloomberg acknowledged when he announced the competition back in 2011 that it would take time for New York to become the high-tech leader he envisioned.

"We understand that we will not catch up to Silicon Valley overnight," he said. "Building a state-of-the-art campus will take years — and attracting a critical mass of technology entrepreneurs may take even longer."

But Bloomberg said he believed that in its first three decades the school could help launch 400 new companies.

Cornell Tech officials say that more than 30 startups have been formed out of the program, raising $20 million and employing 105 people.