Cause of Fatal Tesla Crash Investigated

The case has raised questions about the ability of automakers to keep the attention of drivers engaged as new technology allows them to cede greater control to their vehicles. 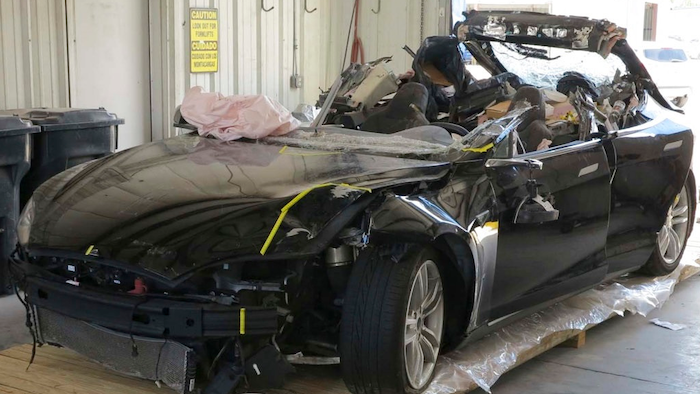 This image provided by the National Transportation Safety Board shows the damage to the left front of the Tesla involved in a May 7, 2016, crash in Williston, Fla. Investigators are meeting Sept. 12, 2017, to determine the likely cause of the crash that killed Joshua Brown, 40, of Canton, Ohio, who was using the semiautonomous driving systems of his Tesla Model S sedan. The sedan struck the underside of a semitrailer that was turning onto a divided highway in Williston. The sedan's roof was sheared off before the vehicle emerged on the other side of the trailer.
NTSB via AP

WASHINGTON (AP) — Investigators are meeting to determine the likely cause of a crash last year that killed a man using the semiautonomous driving systems of his Tesla Model S sedan. The case has raised questions about the ability of automakers to keep the attention of drivers engaged as new technology allows them to cede greater control to their vehicles.

The National Transportation Safety Board is taking up the crash Tuesday, the same day that Transportation Secretary Elaine Chao is to unveil safety guidelines for automakers seeking to market self-driving cars. The board doesn't have regulatory powers, but its recommendations often carry weight with regulators.

Tech company owner Joshua Brown, 40, of Canton, Ohio, was using the sedan's cruise control and lane-keeping features, part of Tesla's Autopilot system, when he was killed in the May 7, 2016, crash. The sedan struck the underside of a semitrailer that was turning onto a divided highway in Williston, Florida, near Gainesville. The sedan's roof was sheared off before the vehicle emerged on the other side of the trailer.

It's the first known fatal crash of a highway vehicle operating under automated control systems, according to the NTSB. Some problems have already been publicly identified. The cameras on Brown's sedan failed to distinguish the white side of the semitrailer from the bright sky, Tesla said at the time. However, Tesla warns drivers to keep their hands on the wheel and to pay attention even when the automated systems are in use. The company has since made upgrades to its Autopilot system.

Documents previously released by the NTSB say the Autopilot system didn't detect hands on the vehicle's steering for 37 of the 37.5 minutes the system was in use prior to the crash. During that time, the vehicle issued seven visual and six audible warnings to the driver to hold the steering wheel.

Brown's family questioned in a statement released Monday whether Brown could have had his hands off the wheel for an extended time since the Model S is supposed to automatically slow down and pull over to the side of the road under those circumstances.

The statement provided by the family's attorney, Jack Landskroner, defended Brown's actions and Tesla. "There was a small window of time when neither Joshua nor the Tesla features noticed the truck making the left-hand turn in front of the car," the statement said. "People die every day in car accidents. Many of those are caused by lack of attention or inability to see the danger."

Brown was a technology geek and enthusiastic fan of the Model S who posted videos about the car and spoke to gatherings at Tesla stores. "Nobody wants tragedy to touch their family, but expecting to identify all limitations of an emerging technology and expecting perfection is not feasible either," the statement said.

The National Highway Traffic System Administration, which regulates auto safety, declined this year to issue a recall or fine Tesla as a result of the crash, but it warned automakers they aren't to treat semiautonomous cars as if they were fully self-driving.