It uses contactless sensing technology to measure the driver's states and in-vehicle environment. 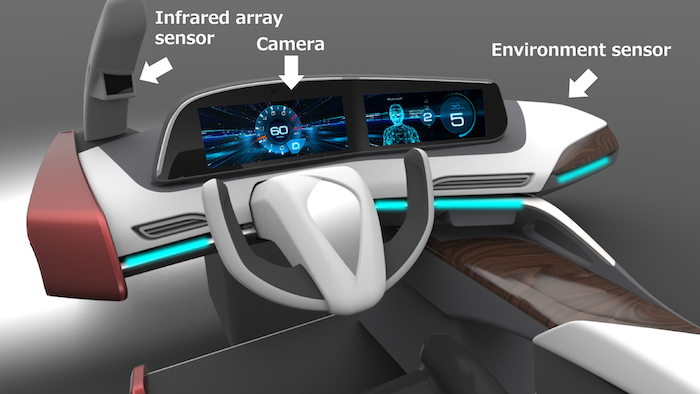 Image of a drowsiness-control system installed in a dashboard.

Today, Panasonic announced that it has developed a drowsiness-control technology for detecting and predicting a person's level of drowsiness and allowing to stay comfortably awake.

This technology, which can help prevent drowsy driving, detects a driver's shallow drowsiness at the initial state by accurately measuring the driver's states without physical contact, including blinking features and facial expressions, etc. captured by an in-vehicle camera, and processing these signals using artificial intelligence.

Detecting drowsiness by observing the blinking features: The system extracts an outline of the eyes and monitors time-sequence shifts in blinking features by checking the opening between the eyelids.

This technology has made it possible to develop a driver-monitoring system that detects the driver's current level of drowsiness and predicts transitions in the driver's drowsiness based on the in-vehicle environment, as well as a drowsiness-control system that allows the driver to stay comfortably awake. These systems prevent the driver from falling asleep while driving.

Relationship between the in-vehicle environment and drowsiness level estimates.

Conventional drowsiness-detection systems had difficulty in predicting transitions in drowsiness. Conventional anti-hypnotic stimulant systems use alarm sounds and vibrations to wake up users, which can make them feel uncomfortable.

Panasonic's newly developed technology, with 22 patents on file, is suitable for applications in human- and environment-monitoring systems for use in such places as private and commercial vehicles, offices and educational institutions; drowsiness-prediction systems; and drowsiness-control systems for keeping people awake.

1. Detects shallow drowsiness the driver is even unaware of by non-contact measurement of blinking features and facial expressions, etc.

A person who feels drowsy shows various signs. For example, people will "have a drowsy facial expression," or "blink in a specific way," when becoming drowsy. Identifying these signs allows to detect the level of drowsiness.

The company has also compiled a database of various measurements on drowsiness and biological signals, and analyzed, from a physiological standpoint, the relationship between about 1,800 parameters related to blinking features and facial expressions, etc., and drowsiness that were extracted from the database.

Based on the results of an analysis of drowsy expressions compiled during joint research with the Ohara Memorial Institute for Science of Labour, a public interest foundation, Panasonic has developed an artificial intelligence capable of estimating an individual's drowsiness level.

These achievements allow to detect the signs of shallow drowsiness, even if a person is not aware of it, and to identify the actual level of drowsiness.

However, some people wear a lot of clothes while others wear less at the same temperature. Such variations in human behavior make it difficult to estimate people's drowsiness based only on the ambient temperature.

Panasonic has conducted joint research with Chiba University, which revealed that heat loss from a person's body is correlated with the person's drowsiness after prescribed time elapses, regardless of how much clothes the person wears.

Panasonic has also developed a contactless technology to measure heat loss from a person's body with the company’s original infrared array sensor Grid-EYE [2]. In addition, the company has identified the effect of the elapsed time and the surrounding brightness, which is measured by an environment sensor, on a person's level of drowsiness.

These results have made it possible to predict how a person's current drowsiness can change by means of heat loss from the body (measured without contact) and the surrounding brightness.

3. Senses and monitors the driver's level of thermal sensation, allowing the person to stay comfortably awake

Adjusting room temperature or airflow based on an individual's estimated level of drowsiness makes it easier to keep a person awake. However, a person would feel a cold when the room temperature is too low, which the level of thermal comfort would be disturbed. 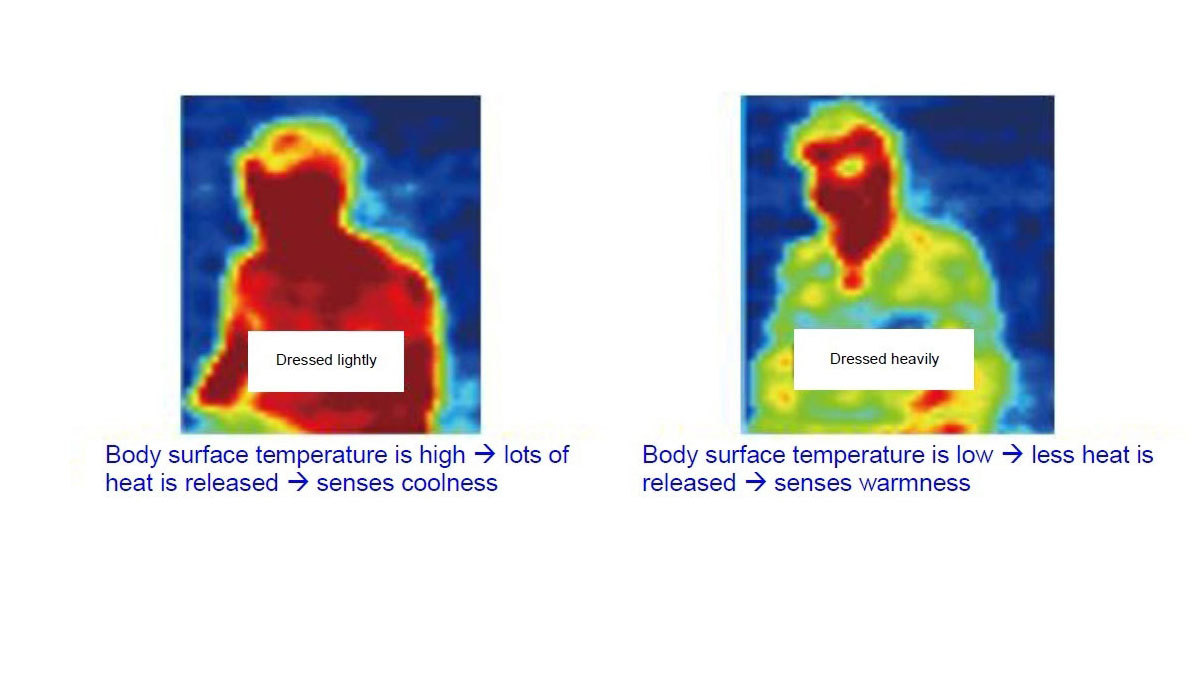 Sensing a person's level of thermal sensation, under the same environment, using the infrared array sensor.

By applying our knowledge of thermal environments and physiology accumulated through research & development of indoor air conditioners and other products, Panasonic has developed, through joint research with Nara Women's University, a technology to estimate the thermal sensation.

This technology can be used inside a vehicle, where the effects of airflow and others are significant. By applying the infrared array sensor Grid-EYE, an individual's level of thermal sensation can be constantly monitored as an optimum means of controlling temperature, for example, an air conditioner. This allows a person to stay comfortably awake.