Jury Rules in Fight Over a Better Strawberry

A researcher sued UC Davis, saying that the university unfairly destroyed some of his work and keeps some of it locked in a freezer, depriving the world of a better strawberry. 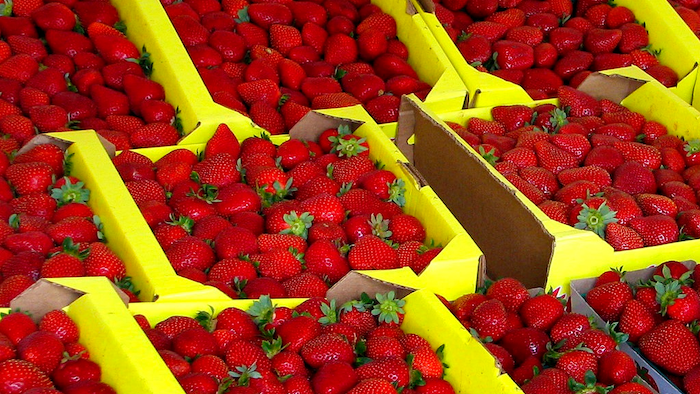 This Aug. 12, 2005 file photo shows organically grown strawberries for sale at a roadside stand in Watsonville, Calif. Jurors have sided with a California research university in its dispute with a renowned plant scientist credited with developing tasty strawberries as a professor there. Jurors in a San Francisco federal court said Wednesday, May 24, 2017, that professor Shaw broke the law when he and his research partner tried to profit from their work in a company they formed.
AP Photo/Rita Beamish, file

FRESNO, Calif. (AP) — A renowned strawberry researcher in California broke patent law and violated a loyalty pledge to his former university by taking his work with him to profit from it in a private company, a jury in San Francisco decided Wednesday.

Professor Douglas Shaw formed his own research firm with others after retiring from the University of California, Davis, where for years he had overseen the school's strawberry breeding program, developing a heartier and tastier fruit.

Jurors in the federal court decided that he used seeds developed at UC Davis without gaining the university's permission.

The rift struck fear in some farmers in California, the No. 1 strawberry-growing state, that it would stymie research and cause them to lose their competitive edge. California last year produced 1.6 million tons of strawberries valued at roughly $2 billion, according to the U.S. Department of Agriculture.

The university's strawberry breeding program is now under new leadership, providing farmers and consumers with new generations of the fruit, school officials said.

"This federal jury decision is good news for public strawberry breeders at UC Davis and all strawberry farmers throughout California and the world," said Helene Dillard, dean of the UC Davis College of Agriculture and Environmental Sciences.

After reading the verdicts, Judge Vince Chhabria, who oversaw the trial, scolded both sides, expressing doubt about the sincerity they claimed to have for the strawberry industry.

"If you really care about strawberries, and if you really cared about California's Strawberry Breeding Program, you would figure out a way... to avoid subjecting them to this custody battle," he said.

Shaw had first sued UC Davis after he retired, saying that the university unfairly destroyed some of his work and keeps some of his other research locked in a freezer, depriving the world of a better strawberry. He had sought $45 million for lost research. The university countersued.

Shaw, 63, is a giant in the strawberry world, heading the university's lucrative breeding program for more than two decades alongside plant biologist Kirk Larson. Most of California's strawberry farmers grow plants developed by Shaw and Larson.

The two men developed 24 new varieties, allowing growers to double the amount of strawberries produced while retaining the fruit's succulence. They created strawberries that were more pest- and disease-resistant, more durable during long-distance travel and capable of growing during the shorter days of spring and fall.

The partners say their work netted the university $100 million in royalties. How much they themselves made at UC Davis is unclear, but they say they contributed more than $9 million of their own royalties toward the university's breeding program.

They retired from the university in 2014 because, they said, the school was winding down the program. Working in partnership with growers and nurseries, they launched a business called California Berry Cultivars, based in Watsonville, to develop new strawberry varieties.

Attorney Sharyl Reisman, who represents the professors and the California Berry Cultivars, said that despite the disappointing verdict, her clients wish to find a way to collaborate with the university.

Damages the professors owe in the case will be decided later, the judge said.

A.G. Kawamura, a strawberry farmer, former California agriculture secretary and part owner of the California Berry Cultivars, said the judge's comments signal a need for much more work to settle the dispute, even after the trial.

"We still believe there's good reason to hope for a collaborative progress for all parties to move our strawberry industry forward without litigation," Kawamura said. "We are still committed to being an important part of the California strawberry industry.

Is World Being Deprived of a Better Strawberry?

May 9th, 2017
Latest in Product Development