Farmers are looking at a second consecutive year of reduced crop size. 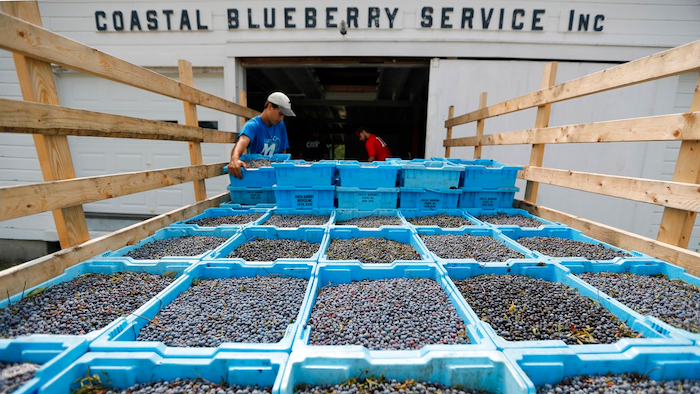 In this Friday, Aug. 24, 2018, photo, Sam Bentzinger, left, and Jake Bentzinger unload freshly picked wild blueberries at the Coastal Blueberry Service in Union, Maine. Selling nature's "super fruit" should be an easy sell for growers. But an oversupply has sent prices plummeting to the lowest point in 30 years, putting the industry on the ropes.
AP Photo/Robert F. Bukaty

DEBLOIS, Maine (AP) — In the era of superfoods, Maine blueberries aren't so super.

The Maine wild blueberry industry harvests one of the most beloved fruit crops in New England, but it's locked in a downward skid in a time when other nutrition-packed foods, from acai to quinoa, dominate the conversation about how to eat. And questions linger about when, and if, the berry will be able to make a comeback.

The little blueberries are touted by health food bloggers and natural food stores because of their hefty dose of antioxidants. They're also deeply ingrained in the culture of New England, and they were the inspiration for the beloved 1948 children's book "Blueberries for Sal." But the industry that picks and sells them is dealing with a long-term price drop, drought, freezes, diseases and foreign competition, and farmers are looking at a second consecutive year of reduced crop size.

At Beech Hill Blueberry Farm in Rockport, this year's harvest was off by about 50 percent, said Ian Stewart, who runs the land trust that manages the farm.

"Our year was a little underwhelming. There was a lot of drought. There was a freeze at a bad time," Stewart said. "We're hoping it's a blip. We'll see."

North America's wild blueberry industry exists only in Maine and Atlantic Canada, and an oversupply of berries in both places caused prices to harvesters to plummet around 2015. Recent years have brought new challenges, such as particularly bad spells of mummy berry disease, a fungal pathogen, and difficulty in opening up new markets.

The blueberries grow wild, as the name indicates, in fields called "blueberry barrens" that stretch to the horizon in Maine's rural Down East region. While the plumper cultivated blueberries harvested in states like New Jersey are planted and grown as crops, harvesters of wild blueberries tend to a naturally occurring fruit and pick it by hand and with machinery.

Woes in the industry have caused some growers to scale back operations in Maine. Harvesters collected a little less than 68 million pounds of wild blueberries in the state in 2017, which was the lowest total since 2005 and more than 33 million pounds less than 2016. Last year's price of 26 cents per pound to farmers was also the lowest since 1985, and was more in line with the kind of prices farmers saw in the early 1970s than in the modern era.

This year's harvest was mostly wrapped by late August, a little earlier than usual, and members of the industry said they believe it was another year of lower harvest. Exact totals aren't available yet, but signs point to a crop that's "similar to last year, or even smaller," said Nancy McBrady, executive director of the Wild Blueberry Commission of Maine.

The industry has tried to focus on growing the appeal of the health aspects of wild blueberries, which are richer in antioxidants than their cultivated cousins, but it has been a slow climb, McBrady said.

"For years, the health message and the taste message of wild blueberries has been successful," she said. "But it's frustrating when we find ourselves in periods of oversupply and competition."

Nearly 100 percent of the wild crop is frozen, and the berries are used in frozen and processed foods. Prices to consumers at farm stands and grocery stores have held about steady in the face of falling prices to harvesters.

The same berries are harvested in Quebec, New Brunswick, Nova Scotia, Newfoundland and Prince Edward Island, and the weakness of the Canadian dollar has also hurt the U.S. industry because Canadian berries sell for less. Some companies operate on both sides of the border, and an equal exchange rate is better for business.

Such financial stress played a role in growers harvesting 5,000 fewer acres in the U.S. last year, said David Yarborough, a horticulture professor at the University of Maine. He said he expects a similar drop this year.

Other factors, such as poor pollination last year, have also held the crop back, Yarborough said. He stopped short of describing the industry as in full-blown crisis, but he said some smaller growers are in crisis mode.

The industry at large is hoping it doesn't suffer too many more down years, said Homer Woodward, vice president of operations for Jasper Wyman & Son, a major industry player.

"I think the state of Maine is going to pick less pounds than last year. That's the product of economic downturn," said Woodward said. "And mother nature was cruel to us this year.

Jury Rules in Fight Over a Better Strawberry