The larger payloads would allow for transporting consumer goods to remote areas and farm produce to cities. 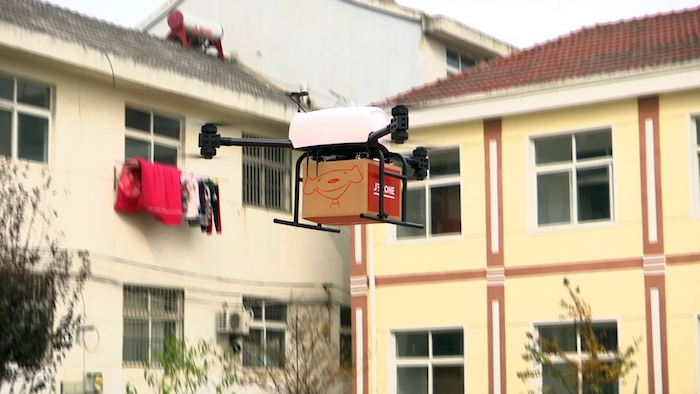 (AP) — China's biggest online retailer, JD.com Inc., has announced plans to develop drone aircraft capable of carrying a ton or more for long-distance deliveries. The company said it will test the drones on a network it is developing to cover the northern Chinese province of Shaanxi.

It said they will carry consumer goods to remote areas and farm produce to cities. JD.com, headquartered in Beijing, says it made its first deliveries to customers using smaller drones in November. Other e-commerce brands including Amazon.com Inc. also are experimenting with drones for delivery.

"We envision a network that will be able to efficiently transport goods between cities, and even between provinces, in the future," the chief executive of JD's logistics business group, Wang Zhenhui, said in a statement. JD.com operates its own nationwide network of thousands of delivery stations manned by 65,000 employees. The company says it has 235 million regular customers.

Drones are part of the industry's response to the challenge of expanding to rural areas where distances and delivery costs rise. Drone delivery in China and other countries faces hurdles including airspace restrictions and the need to avoid collisions with birds and other obstacles. In the United States, regulators allow commercial drone flights only on an experimental basis.

A one-ton payload is heavier than what most drones available now can carry, though some can carry hundreds of kilograms and major drone makers are working on devices able to carry more. China is home to the world's biggest manufacturer of civilian drones, DJI, in the southern city of Shenzhen.

JD.com said its planned drone delivery network in Shaanxi would cover a 300-kilometer (200-mile) radius and have drone air bases throughout the province. The company said it will set up a research-and-development campus with the Xi'an National Civil Aerospace Industrial Base to develop and manufacture drones.