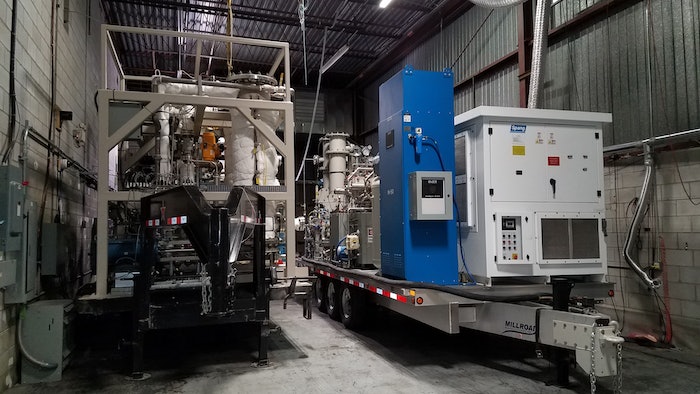 Created under the Agency’s Agnostic Compact Demilitarization of Chemical Agents (ACDC) program, the technology demonstrated greater than 99.9999% removal of the simulants, without creating any hazardous waste by-products.

The soil-scrubbing technology was tested in conjunction with the Tactical Plasma Arc Chemical Warfare Agents Destruction System (PACWADS), a thermal treatment system already under development for use by U.S. military Services.

That system uses a high-temperature plasma torch to convert highly toxic chemicals into relatively benign components, and then uses a water-based capture process to eliminate the last traces of contaminants.

For the ACDC experiment, the PACWADS was modified to eliminate the water scrubber and connect instead to DARPA’s soil-based scrubber system, which captured and converted the toxic CWA decomposition products and resulting acid gases into non-hazardous salts.

An ability to use local soil from the site where CWA stores have been discovered eliminates the logistical burden of supplying water to such sites, which are anticipated to be remote, and then having to transport resulting liquid wastes to a treatment facility.

The soil used in the DARPA process remains non-hazardous and could be safely returned to the environment.

“We were very impressed with fast work by DARPA-supported researchers to develop the soil-based scrubber to test with the PACWADS,” said Tyler McQuade, DARPA program manager. “These successful tests validated a critical component of the ACDC concept—a water-free, non-hazardous, soil-based process for onsite destruction of deadly chemicals. We now look forward to testing the ACDC scrubber with the PACWADS against actual chemical warfare agents in the coming months.”

Following testing of the soil scrubber against actual CWA, which is anticipated for this spring or summer, DARPA plans to continue to develop a novel approach for the initial destruction process that would be simpler and more economical than the PACWADS torch.

That system aims to use an internal combustion “reforming engine.” The engine is designed such that, as part of the destruction process, the organic molecules act as a fuel and efficiently generate recoverable energy that can be converted to electricity, eliminating the need for power sources in remote locations.

Ultimately, ACDC envisions the complete CWA destruction and soil-scrubbing system to fit in the back of a standard military vehicle.

The ACDC soil-scrubber was developed for DARPA by the Southwest Research Institute, San Antonio, Texas. The PACWADS was developed by PyroGenesis Canada, Inc., Montreal, Canada.

The effectiveness of the ACDC soil scrubber and PACWADS was independently verified and validated by the Johns Hopkins University Applied Physics Laboratory, Laurel, Maryland, and NRT Methodologies, Tooele, Utah.