He wants to be paid what he considers a fair price for his dirt. 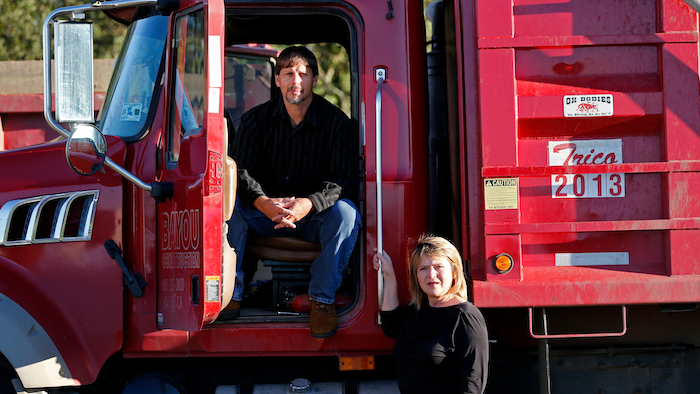 Chad Jarreau poses with his wife Penny Jarreau in front of one of their dump trucks in Cutt Off, La., Tuesday, Oct. 24, 2017. Jarreau had land taken from him by the local bayou districts. They are asking the Supreme Court for help after the local flood control district took some of his land and part of his livelihood, paying him a pittance.
AP Photo/Gerald Herbert

To be more precise, he dug up dirt on his property in Cut Off, Louisiana, graded it again and again and sold it for use in construction projects.

Jarreau is not a wealthy man, but he had a batch of dirt on the edge of his 17-acre (7-hectare) property that was worth more than $150,000. Or it would have been, if the local flood control district hadn't taken it to shore up protection against hurricanes in the low-lying area that brushes up against the Gulf of Mexico.

Jarreau, 44, knows all too well about flooding, having a lost a home on another property to Hurricane Katrina. But he also wants to be paid what he considers a fair price. So he's asked the Supreme Court to step in. The justices could announce as early as Monday whether they will hear the case.

"I've been digging on this land since I bought it," Jarreau said in a telephone interview. "I didn't think they could just take your land like that. I thought if they damaged your property, I thought they'd take care of it."

The case raises a legal issue that the court hasn't dealt with in nearly 70 years. The issue is whether the "just compensation" the Constitution says a government must pay when it takes someone's property includes the value of the business that is lost because of the government's action.

Louisiana's Supreme Court ruled against Jarreau. State supreme courts and federal courts are divided about whether governments must cover business losses when they take private property, said Robert McNamara, a lawyer for the libertarian Institute for Justice, representing Jarreau.

The South Lafourche Levee District is responsible for flood control in the portion of the 106-mile (171-kilometer) Bayou Lafourche that runs through Cut Off before eventually draining into the Gulf. The district took the dirt from just under an acre of Jarreau's land as well as property from some neighbors, under Louisiana laws strengthened after hurricanes Katrina and Rita.

Without the levee system, Jarreau's property would flood frequently, said Loulan Pitre Jr., a former state lawmaker who is the lawyer for the levee district. "There is a strong policy to say that this is all subject to flooding and it's reasonable to expect a small sacrifice to protect everyone."

The levee district certainly thought the sacrifice was small. It initially sent Jarreau a check for $1,326 after notifying him in 2011 that it was going to take the dirt from Jarreau's land that was closest to the bayou.

Jarreau couldn't believe the paltry sum and kept digging because he had a contract for 23,000 cubic yards (17,600 cubic meters) of dirt — enough to cover a football field nearly a foot deep — with a private company that does a lot of work on the levees in coastal Louisiana.

But then the levee district sued to make Jarreau stop digging. Their legal fight eventually went to trial. A judge ruled that Jarreau should be paid nearly $12,000 for the land itself and another $164,000 for his business losses. At the end of the state appeals process, Jarreau was left with just the $12,000.

Many properties in the bayous are long rectangles, with the lowest ground near the water and higher land at the other end.

It's the property nearest the water, what the locals call the back of their tracts, that can be used for flood control.

Jarreau said he didn't know that before his six-year-long legal fight.