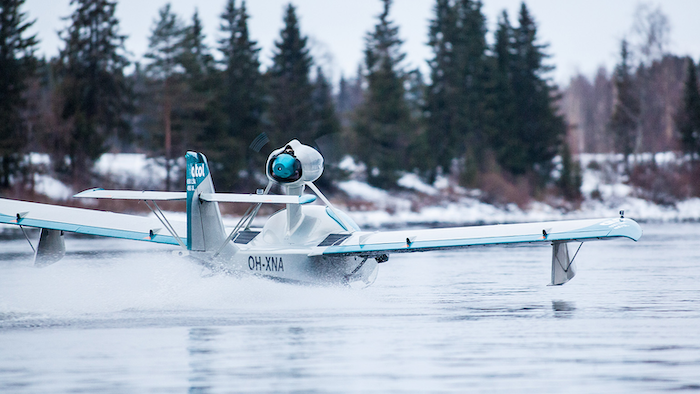 The Atol 650 will be built in Maine to serve the North American market, the world's largest for such aircraft.
Atol Aviation

Finnish company Atol Avion announced at airshows in Florida and Germany the joint venture with a U.S.-based investor group to produce the planes at Brunswick Landing.

The Atol 650 will be built in Maine to serve the North American market, the world's largest for such aircraft, said Atol USA President Paul Richards said.

"Finland has 188,000 lakes, so we know the joys of water flying, and the demands. Many of these lakes are remote and require range and reliability to access so we designed the 650 for this environment," Anssi Rekula, Atol Avion co-founder, said in a statement.

Because it falls under the "light sport aircraft" category, FAA certification is expected to be swift, though it'll still take more than a year, he said.

Another amphibious airplane company, MVP Aero, hopes to build planes in Brunswick, but Atol is further along with a prototype that's been flying in Europe for more than a year, officials said.

Kestrel Aviation was one of the first aircraft makers to commit to Brunswick but moved production to Wisconsin because of tax breaks there. The company since merged with a jet manufacturer, One Aviation, and some parts for jets are made in Brunswick.

"We've taken what the Navy left us and elevated it a notch to attract aviation manufacturers," said Steve Levesque, executive director of the Midcoast Regional Redevelopment Authority, which is developing Brunswick Landing and Brunswick Executive Airport.

Brunswick Landing has been a success story for redevelopment of a military base.

The 3,200-acre Brunswick Naval Air Station, which closed in 2011, has been transformed into a business campus where more than 100 entities that currently employ more than 1,200 workers. The dual, 8,000-foot runways are now part of Brunswick Executive Airport.

Richards said his company will employ 50 to 100 people when manufacturing ramps up. It will begin leasing space for its U.S. headquarters on May 1.

The company wouldn't be competing with established light aircraft manufacturers like Cessna, for example, he said. The Atol 650, he said, will be less costly than a Cessna, but won't be rated for commercial use, and will be limited to two occupants.