The company will supply 30 737 MAX aircraft to the carrier. 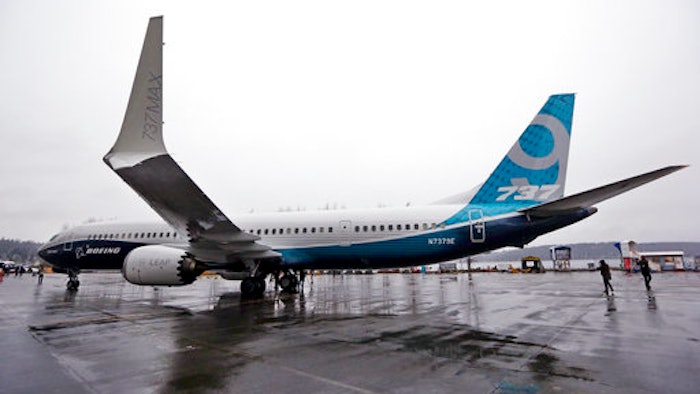 TEHRAN, Iran (AP) — Boeing Co. said on Tuesday it has signed a new, $3 billion deal with Iran's Aseman Airlines to supply 30 737 MAX aircraft to the carrier, the first major sale by a U.S. company to the Islamic Republic under new President Donald Trump.

The new agreement comes on top of the $16.6 billion sale Boeing previously made in Iran following the landmark nuclear deal struck with Tehran under the Obama administration. Trump long has criticized the atomic deal, though he toured a Boeing plant in February and touted the firm's work as proof of a coming American manufacturing renaissance.

Chicago-based Boeing said the deal also includes purchase rights for an additional 30 737 MAX aircraft for Tehran-based Aseman, which flies domestic and international routes. It said the first deliveries of the single-aisle aircraft to Aseman would start in 2022.

Boeing lists 3,621 unfilled orders for the 737 MAX aircraft, which undergo final assembly in Renton, Washington. The first is expected to be delivered to Norwegian Air Shuttle in May.

"According to the U.S. Department of Commerce, an aerospace sale of this magnitude creates or sustains approximately 18,000 jobs in the United States," Boeing said in a statement. "Boeing continues to follow the lead of the U.S. government with regards to working with Iran's airlines, and any and all contracts with Iran's airlines are contingent upon U.S. government approval."

Aseman spokesman Amir Reza Mostafavi told The Associated Press that the deal came following several round of talks over the past year between the airline and Boeing. He said the firms signed the deal March 18 and the first aircraft will be delivered in 2019, contradicting Boeing.

The European Union blacklisted Aseman from European skies in December because of safety concerns. The airline did not operate flights to European destinations at the time.

Less than a week after that decision, the airline sealed a deal to lease seven planes made by European manufacturer Airbus. Those aircraft are expected to begin arriving next month.

The new Boeing deal comes as part of the nuclear agreement reached between Iran and world powers. After the atomic accord, Boeing struck a December deal with Iran Air, the country's flag carrier, for 80 passenger planes worth $16.6 billion. Iran Air also will lease 29 new Boeing 737s.

In January, Iran Air signed agreements to buy 118 planes from Airbus, estimated to be worth some 22.8 billion euros ($25 billion). Asghar Fakhrieh Kashan, a deputy transportation minister, later said Iran would cut the number of Airbus planes to 112.

Washington granted permission for Boeing and Airbus to make the sales in September. Both manufacturers needed the approval of the U.S. Treasury for the deal because at least 10 percent of the airplanes' components are of American origin. The Treasury similarly would need to approve this latest deal.

Iran's nuclear deal with world powers, which limits its enrichment of uranium in exchange for the lifting of some international sanctions, specifically allowed for the purchase of aircraft and parts.

Iran represents one of the last untapped aviation markets in the world, home to 80 million people. However, Western analysts are skeptical that there is demand for so many jets or available financing for deals worth billions of dollars.

Another wildcard is U.S. politics. Trump has threatened to renegotiate terms of the Iran deal, while some lawmakers have suggested putting new sanctions in place and criticized Boeing for selling aircraft to the Islamic Republic.