Aircraft of the Future Has Morphing Wings 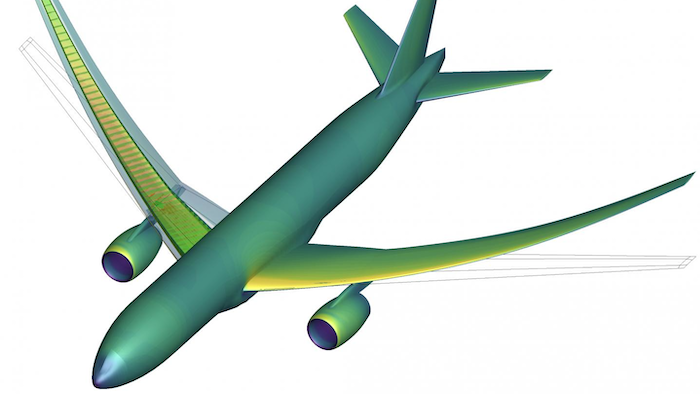 Martins designed new, high aspect ratio wings that have a much larger span than those in use today. Boeing has adapted that model and will build a prototype to test at NASA's Transonic Dynamics Tunnel later this year.
Joaquim Martins

As much as we complain about air travel, the fact is, flying has gotten considerably cheaper, safer, faster and even greener, over the last 60 years.

Today's aircraft use roughly 80 percent less fuel per passenger-mile than the first jets of the 1950s - a testimony to the tremendous impact of aerospace engineering on flight. This increased efficiency has extended global commerce to the point where it is now economically viable to ship everything from flowers to Florida manatees across the globe.

In spite of continuous improvements in fuel burning efficiency, global emissions are still expected to increase over next two decades due to a doubling in air traffic, so making even small improvements to aircrafts' fuel efficiency can have a large effect on economies and on the environment.

This potential for impact motivates Joaquim Martins -- an aerospace engineer at the University of Michigan (UM) who leads the Multidisciplinary Design Optimization Laboratory -- to develop tools that let engineers design more efficient aircraft.

"Transportation is the backbone of our economy. Any difference you can make in fuel burn, even a fraction of a percent, makes a big difference in the world," Martins says. "Our goals are two-fold: to make air transportation more economically feasible and at the same time to reduce the impact on the environment."

Using the Stampede supercomputer at the Texas Advanced Computing Center, as well as computing systems at NASA and UM, Martins has developed improved wing designs capable of burning less fuel, as well as tools that help the aerospace industry build more efficient aircraft.

"We're bridging the gap between an academic exercise and a practical method for industry, who will come up with future designs," he says.

Improvements in wing design have the potential to improve efficiency up to 10 percent, lowering costs and pollution. Moreover, in areas where new technologies are being applied - such as for wings made of composite materials or wings that morph during flight - improved design tools can provide insights when intuitive understanding is lacking.

Today's airplanes feature 50 percent composites materials, but the composites are placed in a relatively simple way. New automatic fiber placement machines, however, can place composites in complex curves, creating what are known as tow-steered composite wings.

"That opens up the design space, but designers aren't used to this," Martins says. "It's challenging because there isn't a lot of intuition on how to utilize the full potential of this technology. We developed the algorithms for optimizing these tow-angles."

They found that tow-steered composites can reduce the structural weight of an aircraft by 10 percent when compared to conventional composite designs while reducing the fuel burn by 0.4 percent. NASA is in the process of building a prototype of a tow-steered wing box for a scale test at NASA's Armstrong Flight Research Center.

Another area of study is morphing wings that change shape to maintain maximal performance regardless of flight speed, altitude and aircraft weight.

Martins, David Burdette and Gaetan Kenway (all from UM) presented results for a morphing design that has the potential to burn 2 percent less fuel than current designs at the 2016 AIAA SciTech Forum. Martins also published a chapter in the Encyclopedia of Aerospace Engineering on "Fuel Burn Reduction through Wing Morphing" describing potential designs ideas and optimization methods in this area.

"Research on new materials and morphing mechanisms will make morphing systems lighter, more energy efficient, and more economical," he wrote. "It is just a question of time before we see aircraft wings that exhibit morphing capabilities that seem impossible today."

A third area of investigation involves new, high aspect ratio wings that have a much larger span than those in use today.

Martins presented designs for such a wing at the 15th AIAA/ISSMO Multidisciplinary Analysis and Optimization Conference in 2014. Boeing has adapted that model and will build a prototype to test at NASA Langley Research Center's Transonic Dynamics Tunnel later this year.

Designing aircraft using computer models isn't new, but in the past, studies either used low-fidelity models or confined themselves to a single area of investigation - the aerodynamics of the wing or its structural integrity. These studies were passed between groups of engineers, leading to designs that were more efficient than those they supplanted, but not necessarily optimal.

Martins uses a different approach, called multidisciplinary design optimization, that combines many factors and high-fidelity models into a coupled computational optimization problem. This approach can lead to greater improvements than the single-study method, he says, but it requires the application of massive parallel supercomputers, capable of running complex calculations that account for hundreds or even thousands of design variables, all considered in tandem.

"Our problems require 100s or 1000s of processors and we try to get each simulation to be on the order of a few minutes, and the optimization to converge within eight to 48 hours," Martins says.

He runs these calculations not once, but hundreds of times to arrive at the best possible solution and to test the integrity of the new design in likely flight conditions.

"Computational fluid dynamics and computational structural mechanics are demanding," he says. "To solve our problems, we absolutely need a supercomputer like Stampede."

Stampede, supported by the National Science Foundation (NSF), is currently the 17th fastest supercomputer in the world, according to the most recent Top500 list, which ranks high performance computing systems. Later in 2017, TACC will debut Stampede 2, which will be roughly twice as powerful as its predecessor.

Boeing and NASA are both testing prototypes based on wing designs suggested by Martins' optimizations, but the impact of his research goes beyond any one design. Martins' algorithms provide a means to combine the many complicated factors that go into a design into a single computational process. He is currently working with Embraer to evaluate the algorithms he has developed for use in production. He has also discussed the practicality of his algorithms with Bombardier, Airbus, and Boeing.

Ultimately, applying Martins' algorithms to an industrial process would require additional elements - for instance, the use of a greater range of flight conditions to assure the safety of the aircraft, and integration with manufacturing costs to confirm the more efficient aircraft can be constructed economically.

The effort is worthwhile, however, because the impact -- on commerce and on people's lives -- is substantial.

"If you think about it, it's incredible that you can fly across the U.S. for a few hundred dollars," says Martins. "Ticket prices have gone down dramatically over the last several decades and that allows people to go visit their families for Thanksgiving. And it's been enabled by more efficient aircraft."