Auto Show Concepts: Build It or Forget It?

These concept cars will help gauge the public's reaction to new designs or technology.

Dee-Ann Durbin
In a Jan. 9, 2017, file photo, Herbert Diess, chairman of the Volkswagen brand, poses with the I.D. Buzz all-electric concept van, at the North American International Auto Show, in Detroit. The I.D. Buzz seats up to eight and lets the driver’s seat face the rear when the minivan is in self-driving mode. VW minibuses haven’t been sold in the U.S. since the 1970s, but the company has released several concepts over the years that take their styling cues from the beloved minibus.
AP Photo/Tony Ding, File

DETROIT (AP) — Car companies don't just show current models at auto shows. They also unveil prototypes that could be built in the future. These so-called concept cars help them gauge the public's reaction to new designs or technology. They can also amp up excitement about a company's future.

These are some of the concept vehicles on display at the North American International Auto Show in Detroit, which opens to the public Saturday. As show visitors check out these concepts they should ask themselves: Would I build it or bag it?

The latest incarnation of VW's groovy, 1960s minibus is the I.D. Buzz. VW says I.D. stands for "identity" and "iconic design." The "buzz" refers to the whirring sound of the electric drive system, which can take the minivan up to 270 miles on a charge. The I.D. Buzz seats up to eight and lets the driver's seat face the rear when the minivan is in self-driving mode.

VW minibuses haven't been sold in the U.S. since the 1970s, but the company has released several concepts over the years that take their styling cues from the beloved minibus. This one would fit neatly with VW's goal of selling 1 million electric vehicles annually by 2025.

Infiniti hints at the future design of its midsize SUV with the QX50. Its flowing lines resemble other, newer members of the Infiniti family, like the smaller QX30. The concept has an advanced semi-autonomous driving system that can take over for the driver in some situations, like stop-and-go traffic.

It also has a significantly more efficient engine. Infiniti is expected to build a model very close to the concept version that will go on sale next year.

Automakers often load up concept vehicles with features that might not make it into production. Take the concept Lincoln Navigator. Giant gull-wing doors in the rear and three steps that unfold to help occupants climb in aren't likely to be seen in dealer showroom.

Still, the sleek, wagon-like shape gives a clue that the new Navigator will be a sharp departure from the current, truck-like one, which debuted in 1997. The 2018 Navigator is expected to go on sale later this year.

Cadillac says the gleaming Escala gives an idea of a future flagship sedan. It has smooth surfaces and a long hood. Inside are thin, curved display screens that respond to touch, voice and gesture commands and fabric seats inspired by high-fashion suits.

The Escala is a rear-wheel-drive sedan with a 4.2-liter twin-turbocharged V8 that can cut back to four cylinders to save fuel. While the Escala is a beauty, its sales prospects are dim in a market that is crazy for SUVs. Cadillac sedan sales were down 2 percent last year; by contrast, sales of the Escalade SUV jumped 11 percent.

What could make an SUV stand out in a market overrun with them? How about a bonsai tree? Chinese automaker GAC — that stands for Guangzhou Automotive Group — is displaying the EnSpirit concept on the auto show floor, a small four-door SUV with a retractable cloth roof. Inside are light wood accents and a long center stack that features a little bonsai tree in the rear.

The EnSpirit is a plug-in hybrid, and GAC says it can go around 60 miles in electric mode before the small gas engine kicks in. Although GAC says it hopes to sell vehicles in the U.S. by 2019, it won't say whether the EnSpirit — or anything like it — could eventually be sold here. 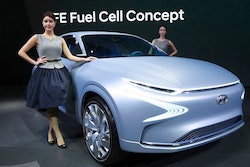