Carmakers will roll out faster and more powerful models at this year's New York auto show. 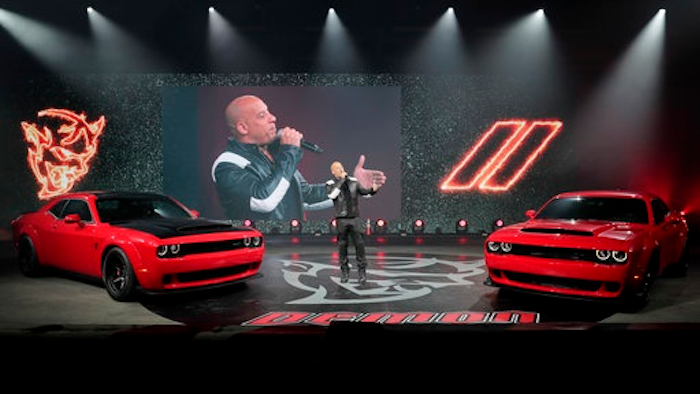 Although Croatti's car sounds like a NASCAR racer, the retired pilot from Port Orange, Florida, isn't looking for attention. He just loves the power.

"The visceral effect of the air, the sound," he says. "All you've got to do is tickle the gas a little bit and the hairs on the back of your head stand up."

At a time when mainstream and luxury cars look similar inside and out, buyers like Croatti are hungry for sound and speed, and car companies are happy to oblige.

On Tuesday night, Fiat Chrysler's Dodge brand used explosions, burnouts and a small drag strip to ramp up horsepower even more. Ahead of the press days of the New York auto show, Dodge rolled out the 840-horsepower Demon Challenger, which FCA says is the fastest and most powerful production car made.

The horsepower craze isn't limited to big cars or domestic automakers. In New York, Honda's 306-horsepower compact Civic Type R will make its U.S. debut. Mercedes will roll out two new AMG high-performance vehicles including the GT R Coupe with a 577-horsepower 4-Liter V-8. Both can go zero-to-60 in under four seconds. Porsche's Panamera Turbo S E-Hybrid will make its North American debut with total output of 680 horsepower, the second-most powerful Porsche ever.

With the exploding popularity of SUVs, the craze extends there, too. One of the Mercedes AMGs is an SUV. Last week Chevrolet rolled out the Tahoe RST with a 420-horsepower version of the Corvette V-8 and a zero-to-60 time of 5.7 seconds, unheard of previously for a truck-based vehicle. Not to be outdone, Fiat Chrysler on Sunday unveiled a 707-horsepower Jeep Grand Cherokee, which it says is the fastest SUV ever with a zero-to-60 time of 3.5 seconds and a top speed of 180 mph.

Horsepower has risen so high that some experts are proclaiming a new "golden age of muscle cars" that far outpace the first generation from the 1960s.

"Horsepower is actually creeping up on every single car across the board," says Tim Kuniskis, head of FCA's Street and Racing Technology unit, who on Tuesday introduced the Demon — along with "The Fast and the Furious" actor Vin Diesel. "A lot of it is due to the fact that we have the technology that allows you to have the power now and not have any downside" such as poor handling or reliability problems.

The Demon can go from zero to 60 miles per hour (97 kilometers per hour) in only 2.3 seconds. That beats electric car maker Tesla Motors' Model S P100D sedan, which hits 60 in 2.5 seconds.

The Demon is street legal, but it's also made with special parts allowing it to run on a drag strip. And run it does. The car can do the quarter-mile in 9.65 seconds, hitting 140 mph. Ordinary muscle cars cover the same distance in 11 or 12 seconds.

Back in the 1960s, muscle cars had little other than power. Drivers had to be skilled because the cars handled and braked poorly, says Randy Dye, owner of the Dodge dealership in Daytona Beach. Croatti bought his Charger there, and has ordered a Demon from Dye.

"The brakes were just a little bit better than Fred Flintstone" a cartoon character from the cave-man era who halted his car with bare feet, says Dye.

The new generation has sophisticated suspensions and performance tires for better handling, and the brakes are beefed up, making the cars easier for the average person to use. "You don't have to be a NASCAR driver or Formula One driver or Indy car driver," Dye says. Even the base version of many cars has a lot of oomph. The base Charger with a 3.6-Liter V6 has almost 300 horsepower.

Car enthusiasts say the first golden age ended when new pollution controls were required in the early 1970s, and horsepower dropped until recently.

The Demon relies a lot on supercharging technology to get its crazy horsepower. Its air conditioner cools air entering the engine, letting the car inhale more gasoline for added power. It can be equipped with a button on the dashboard to run on high-octane fuel for faster acceleration, and there's an optional kit with skinny front tires for less rolling resistance in a quarter-mile drag strip race.

The cars aren't made for gas mileage, but even the powerful Hellcat can get 22 miles per gallon on the highway, Kuniskis said.

In an era of $2.50 per gallon gas, people aren't buying Hellcats and other powerful cars for practicality, says Kuniskis. Instead, market research shows most like to make a statement. "Nobody is going to buy a car without a story," he said. "If you're going to spend $70,000 for a Hellcat, you want to be able to tell people 'I got a Hellcat.'"

Judging from what's being unveiled in New York, it's almost certain that the horsepower race will continue as people keep seeking more power. But it could be limited by concerns about reliability, Kuniskis said. And someday it may get too extreme. "Can the average person ever take advantage of that 700 horsepower?" he asked. "Maybe not. But it's there."