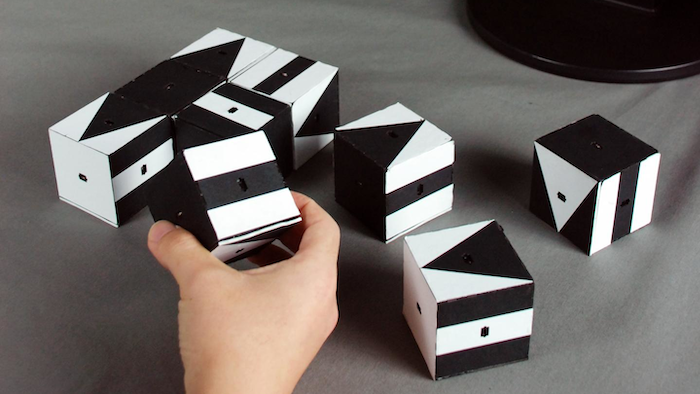 Sensor-Integrated Geometric Blocks, or SIG-Blocks, have a number of sensors inside that help reveal hyperactivity, problem-solving strategies and more during testing.
Kiju Lee

Psychologists have long used building blocks to assess cognitive skills. But researchers at Case Western Reserve University are embedding the blocks with technology that may provide a clearer view of problems a child or adult may suffer due to developmental disabilities, brain trauma or dementia.

In testing college-age adults, blocks with sensors inside detected hyperactivity and revealed the problem-solving strategies used by each subject. The sensors also detected performance accuracy and the time each user took to complete given tasks.

The blocks are fully automated, wirelessly relaying data to a computer. The technology could potentially allow a parent or other caregiver in a rural home to administer tests while a trained clinician hundreds of miles away completes the assessment by internet.

"These Sensor-Integrated Geometric Blocks, or SIG-Blocks, can be used for cognitive testing and training with subjects of any age, and the testing is customizable," said Kiju Lee, assistant professor of mechanical and aerospace engineering at Case Western Reserve and leader of block development.

The research is published in the journal Computers in Human Behavior. Lee's coauthors are Donghwa Jeong, a PhD student at the Case School of Engineering; Rachel Schindler, a PhD student in psychology; and Elizabeth Short, psychology professor.

In this first set of tests, 89 college students played what are called Tangible Geometric Games, using blocks with printed geometric patterns on their surfaces.

The games required them to:

"One advantage of using the blocks is they eliminate human error and biases," Short said.

Human error can include when to begin and finish timing a standardized intelligence test, how closely a clinician monitors the subject and interpretations of activity. Research has shown that adults--including experimenters--are biased toward subjects who appear intelligent, giving them a benefit of the doubt over subjects who appear less so.

"Testing has always been standardized, but this is more fine-tuned and more accurate," Short said. "The sensor-enabled blocks record the movement pattern--each attempt, each movement and how long it takes, hesitancy, whether a subject thinks through the task and makes the necessary manipulation or whether he turns and turns the block until he gets it right."

Another advantage, the researchers say, is testing with the blocks is not as rigid as standardized tests.

"If a subject can't assemble three blocks into a pattern, we can move to two blocks or simplify the pattern," Short said. "This way, I can get to the skill problem: they can't rotate the block, or can't invert the block."

The blocks can then be used to train the children or adults to use the blocks in certain ways, to try to address the skill problem.

From Children to the Aged

The researchers have also been testing children ages 4 to 8, some with autism spectrum disorder, speech delays and hyperactivity.

Lee has also started working with Case Western Reserve's Elizabeth Madigan, the Frances Payne Bolton School of Nursing's associate dean for academic affairs and Independence Foundation Professor, and Grover "Cleve" Gilmore, dean of the Jack, Joseph and Morton Mandel School of Applied Social Sciences and professor of psychology and social work, to use this block technology and games on older adults.

"Psychologists have used block design tests for more than 100 years, so we know which designs are difficult to reproduce and the time it takes," Gilmore said. "For the first time we can evaluate the micro aspects of manipulating each block and the full assembly. I think this will give us a better understanding of cognition and what happens in aging and what happens with dementia."

The studies are funded by the National Science Foundation.

Lee said the team has incorporated computational measures of play complexity that allow them to see correlations with age. To look further, the researchers are in the process of designing tests and games that are individualized for each user. Lee's lab has also been developing new versions of blocks, which provide visual, tactile and auditory feedback. All will be incorporated into new games.

"We've got a lot of testing to do in adults and children," Short said. "But I'm cautiously optimistic this technology can give information."