Finally, a fitting fabrication for the fun guy. 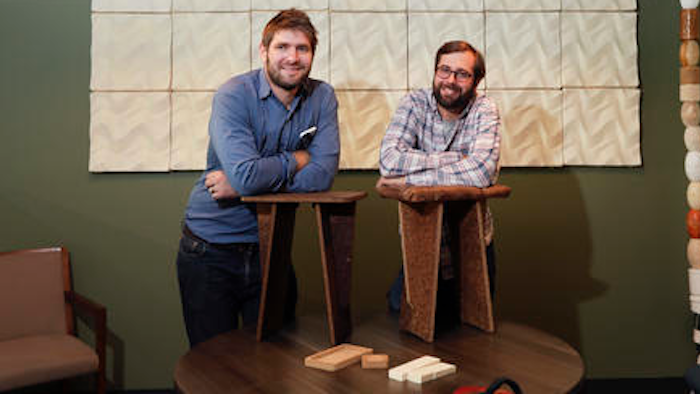 In this Sept. 27, 2016 photo, Ecovative Design co-founders Eben Bayer, left, and Gavin McIntyre pose in Green Island, N.Y. Ecovative Design is a business staking its growth on mycelium, the thread-like "roots" of mushrooms. The mycelium grows around small pieces of stalks and stems to create a bound-together material that can be molded into soft packaging for glassware or pressed into the boards used for the footstools they recently began selling.
AP Photo/Mike Groll

GREEN ISLAND, N.Y. (AP) — The sturdy stools and spongy cushions made at an upstate New York factory are formed with fungus (see photos in gallery).

Ecovative Design is a business staking its growth on mycelium, the thread-like "roots" of mushrooms. The mycelium grows around small pieces of stalks and stems to create a bound-together material that can be molded into soft packaging for glassware or pressed into the boards used for the footstools they recently began selling.

"It's like growing a tree in the shape of your furniture," said Ecovative co-founder Gavin McIntyre. "But rather than a tree, we're using mushrooms."

The simple stools are organic markers in ambitious efforts by researchers worldwide to commercially grow fungi, bacteria and proteins into clothing and building materials. Proponents see micro-organisms as factories of the future, displacing energy-intensive manufacturing with more sustainable models.

While the young grow-it-all field is still more about promise than actual products, companies are working on making bricks without kilns, leather without cows and silk without spiders.

McIntyre rapped his knuckles on one of their "myco-boards," which look and feel similar to the particle boards that are commonplace in cabinets and big-box store furniture. He was on the floor of Ecovative's hangar-like facility north of Albany where chopped-up farm stuff is steamed and bagged up with mycelium.

Stacked on high-rise racks, the minuscule white mycelium threads feed on the stalks and woody bits, binding it together. After a week or so, the big clear plastic bags look little like giant pieces of frosted shredded wheat.

McIntyre and Ecovative co-founder Eben Bayer have been harnessing mushroom power since they were Rensselaer Polytechnic Institute students growing fungus under their beds for a class project a decade ago. Today, they employ about 90 people in a business that found initial success selling a compostable alternative to plastic foams used for packaging items like computers and glass bottles.

But Bayer and McIntyre always believed mycelium to be more multifaceted. They figured out a way to create boards by adding heat and pressure and how to make flexible cushions. They sell boards to home furniture makers and recently started offering for sale their own grown-for-home items, like the $199 Imperial Stool.

They see their mushroom boards as a formaldehyde-free alternative to composite wood products and are working with outside mills to ramp up production.

The bricks stiffen over several days with the formation of calcium carbonate between the grains of sand, mimicking the process that makes coral reefs sturdy. The company's bricks have been used to pave a pair of courtyards in San Francisco, and it is working with builders and pavers who could make their bricks on site.

Bricks and boards created from living organisms are sometimes called "biofabricated" products. An annual "Biofabricate" conference to be held Thursday in New York will feature speakers involved in efforts from everything to growing human tissue into ears to growing leather.

One conference participant, Tsuruoka, Japan-based Spiber, last year was involved in the unveiling of a prototype of North Face-branded "Moon Parka," made with synthetic spider silk fibers. Plans to sell the parka in Japan have been delayed as they improve production.

While many industries see growth potential in growing materials, there are still open questions on whether they will be better than current manufacturing techniques, said Andrew Pelling, of the University of Ottawa.

Pelling, who runs a biophysical manipulation lab, has done work growing human ear cells using the cellulose from apples as a sort of scaffolding. He sees a lot of promise and interest from an array of industries, but he also believes there is a long road ahead for more sophisticated grown products.

"We're living in a biological stone age now," he said. "I think we shouldn't underestimate how much complexity there is in biology and I think there are still a lot of mysteries to figure out before we have real full control to dial in anything you want to grow or make or repair," Pelling said. "And for me, that's the exciting part."