Electrical currents can be now be switched on and off at the smallest conceivable scale enabling a new generation of green electronics. 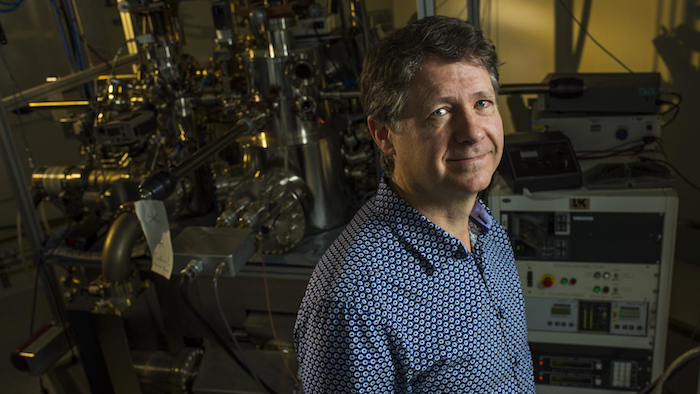 Robert Wolkow, University of Alberta physics professor and the Principal Research Officer at Canada's National Institute for Nanotechnology, has developed a technique to switch a single-atom channel.
John Ulan

Robert Wolkow is no stranger to mastering the ultra-small and the ultra-fast.

A pioneer in atomic-scale science with a Guinness World Record to boot (for a needle with a single atom at the point), Wolkow's team, together with collaborators at the Max Plank Institute in Hamburg, have just released findings that detail how to create atomic switches for electricity, many times smaller than what is currently used.

What does it all mean? With applications for practical systems like silicon semi-conductor electronics, it means smaller, more efficient, more energy-conserving computers, as just one example of the technology revolution that is unfolding right before our very eyes (if you can squint that hard).

"This is the first time anyone's seen a switching of a single-atom channel," explains Wolkow, a physics professor at the University of Alberta and the Principal Research Officer at Canada's National Institute for Nanotechnology. "You've heard of a transistor--a switch for electricity--well, our switches are almost a hundred times smaller than the smallest on the market today."

Today's tiniest transistors operate at the 14 nanometer level, which still represents thousands of atoms. Wolkow's and his team at the University of Alberta, NINT, and his spinoff QSi, have worked the technology down to just a few atoms.

Since computers are simply a composition of many on/off switches, the findings point the way not only to ultra-efficient general purpose computing but also to a new path to quantum computing.

"We're using this technology to make ultra-green, energy-conserving general purpose computers but also to further the development of quantum computers. We are building the most energy conserving electronics ever, consuming about a thousand times less power than today's electronics."

While the new tech is small, the potential societal, economic, and environmental impact of Wolkow's discovery is very large. Today, our electronics consume several percent of the world's electricity.

As the size of the energy footprint of the digital economy increases, material and energy conservation is becoming increasingly important.

Wolkow says there are surprising benefits to being smaller, both for normal computers, and, for quantum computers too. "Quantum systems are characterized by their delicate hold on information. They're ever so easily perturbed. Interestingly though, the smaller the system gets, the fewer upsets." Therefore, Wolkow explains, you can create a system that is simultaneously amazingly small, using less material and churning through less energy, while holding onto information just right.

When the new technology is fully developed, it will lead to not only a smaller energy footprint but also more affordable systems for consumers. "It's kind of amazing when everything comes together," says Wolkow.

Wolkow is one of the few people in the world talking about atom-scale manufacturing and believes we are witnessing the beginning of the revolution to come. He and his team have been working with large-scale industry leader Lockheed Martin as the entry point to the market.

"It's something you don't even hear about yet, but atom-scale manufacturing is going to be world-changing. People think it's not quite doable but, but we're already making things out of atoms routinely. We aren't doing it just because. We are doing it because the things we can make have ever more desirable properties. They're not just smaller. They're different and better. This is just the beginning of what will be at least a century of developments in atom-scale manufacturing, and it will be transformational."