An important new tool for controlling fusion plasmas that are hotter than the sun. 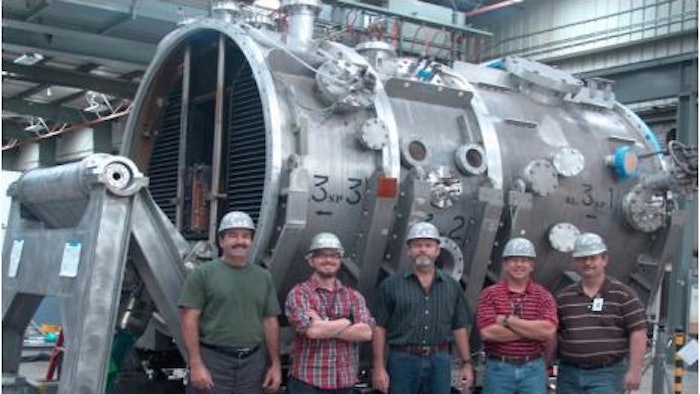 Members of the DIII-D Neutral Beam Group in front of a beam housing for two of the eight beamlines.
General Atomics

Researchers working at the DIII-D National Fusion Facility at General Atomics (GA) have created an important new tool for controlling fusion plasmas that are hotter than the sun.

Energy and momentum in DIII-D's magnetically contained plasma is delivered by large neutral-particle beams systems, and GA's recent demonstration of precise control of injected power and torque is a first. Scientists are now able to pre-program these inputs over the duration of plasma discharges (called "shots").

GA led the development effort in collaboration with scientists from the University of California-Irvine and Princeton Plasma Physics Laboratory.

Changing the way this system operates is a significant effort, considering the size and complexity of each beam system; there are four truck-sized housings for eight total beams at DIII-D (Figure 1). The neutral beam system injects up to 20 megawatts of power, approximately the power used by 15,000 homes.

In the past, neutral beams have operated by accelerating ions through a high voltage (approximately 90,000 volts, compared to the 120 volts of a typical household power outlet) that is fixed in time, and then passing them through a chamber of dense gas where they neutralize and fly into the magnetized plasma. High acceleration voltage is necessary to maximize the velocity of the resulting neutral atom and beam heating power.

Experiments in recent years have shown that the velocity of the beam particles can produce or amplify electromagnetic plasma waves that kick those beam particles out of the plasma and into the walls of the tokamak.

This presents a dilemma because high beam power is necessary to reach fusion temperatures, but the beam particle loss reduces the temperature and can lead to costly damage along the tokamak walls.

The solution is to vary the beam's high voltage over time, thereby reducing beam particle losses due to plasma waves while maximizing input beam power. As the plasma is heated, the behavior of the plasma waves changes such that beam particles of different velocities interact with the waves. Now, the DIII-D neutral beams can be given pre-programmed voltage profiles that minimize wave-particle interactions.

This keeps the beam particles in the plasma and allows the beam voltage to increase to higher levels that maximize the input heating power.

An example of reduced plasma wave activity is shown in the plots below (Figure 2 in gallery), where similar plasma conditions produce very different waves based on the time evolution of the beam voltage.

"This project involved two years of engineers and physicists working hard to create something new, and it's wonderful to see it working successfully on DIII-D," said Dr. David Pace, a physicist who led the project for the GA Energy Group, "Now we get to focus on the next exciting step, which is demonstrating all the ways these variable voltage beams can improve magnetic fusion in machines across the world."

Initial results will be presented by Tim Scoville, head of the Neutral Beam Group at DIII-D, at the annual meeting of the American Physical Society Division of Plasma Physics, Oct. 31 - Nov. 4. This work is supported by the U.S. Department of Energy, Office of Science, Office of Fusion Energy Sciences, at the DIII-D facility operated by GA.