Samsung Still Stumped by Note 7, Appoints Heir to Board

Investors will be keen to hear how Lee Jae-yong, whose grandfather founded Samsung in 1938, plans to restore Samsung's image and win back trust after the Note 7 was scrapped less than two months after its launch. 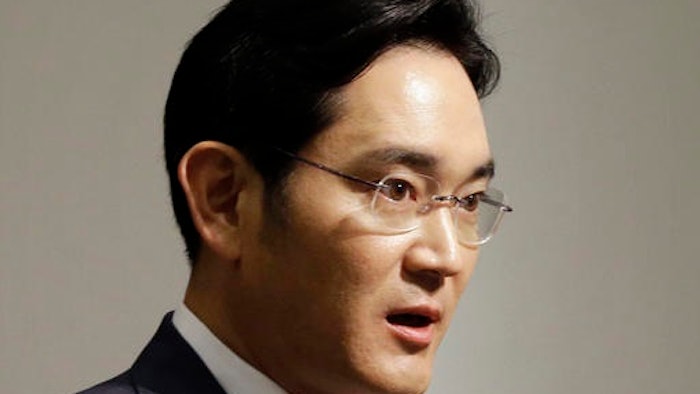 SEOUL, South Korea (AP) — Samsung Electronics is still trying to figure out why its Galaxy Note 7 smartphones were catching fire, the company said Thursday, as shareholders appointed the grandson of the company's founder to its board.

Samsung Electronics, the world's largest maker of smartphones, memory chips and TVs, reported a sharp fall in its quarterly earnings after the unprecedented recall and discontinuation of fire-prone Galaxy Note 7 smartphones wiped out its mobile profit in the last quarter.

Investors will be keen to hear how Lee, whose grandfather founded Samsung in 1938, plans to restore Samsung's image and win back trust after the Note 7, initially launched as Samsung's weapon against the iPhone, was scrapped less than two months after its launch.

The company reported dozens of reports of fires of both the original Note 7s and replacement phones handed to customers who handed in recalled phones.

Samsung has taken heat for its handling of the recall and its hasty and apparently incomplete initial investigation into what was going wrong with the premium smartphones.

Samsung's top executive Shin Jong-kyun apologized to shareholders and customers Thursday, saying the company is looking into all possible issues to pin down why the phones were overheating.

The company's decision to hold an extraordinary shareholder meeting to appoint Lee to the board, instead of waiting until its regular spring meeting, suggests a sense of urgency: the company cannot launch its next flagship phone, the Galaxy S8, without resolving the Note 7 mystery first.

"What is important is clearly investigating the cause," said Lee Seung-woo, an analyst at IBK Securities. "It cannot develop a new product on top of the imperfect platform of the Galaxy Note 7, which had all of Samsung's latest technologies."

Samsung said it expects the Note 7 fiasco to cost it at least $5.3 billion through early next year.

Samsung's mobile business usually contributes more than half of its overall income. But it generated just 100 billion won ($87.9 million) in operating income during July-September, compared with 2.4 trillion won a year earlier.

Even before the messy recalls, like other big "chaebol," or industrial conglomerates in South Korea, Samsung was being urged to improve its transparency and corporate governance.

Lee Jae-yong is thought to have been making key decisions for Samsung since a heart attack in 2014 left his father, now 74, unable to oversee the company. But he largely handled internal management and meetings with VIPs.

Lee Kun-hee resigned from the board of Samsung Electronics in 2008, facing investigation over alleged tax evasion and other financial violations. His son's appointment to the board was long expected, but is raising questions.

Lee Jae-yong was Samsung's chief operating officer from 2010 to 2012. Some South Koreans have opposed giving him a board position because of questions about how he amassed billions of dollars of personal wealth and doubts over the performance of businesses he has run.

"He has never successfully demonstrated that he is eligible to be a board member," said Lee Jee-soo, a lawyer and head of the Law and Business Research Center. "Just because he was born as the son of Lee Kun-hee, he is joining the board."

Last year, Samsung narrowly won shareholder approval for merging two group companies, Samsung C&T and Cheil Industries. Critics of the plan said the only reason to merge them was to help Lee Jae-yong strengthen his control over Samsung Electronics without having to pay to acquire more shares.

Samsung contended that the merger was in line with local laws and necessary for the future of the two companies.

Kwon Oh-hyun, CEO of Samsung Electronics, said Lee has proven his leadership in other ways, such as helping to improve the company's profitability through restructuring.

Samsung's earnings report Thursday showed that while its mobile profit shrank dramatically, its components businesses, especially its high-density chips for computers and next-generation smartphone displays called OLEDs, performed well thanks to strong demand from global smartphone makers. The components businesses generated more than 80 percent of the company's quarterly income in the latest quarter, helping Samsung weather the cost of the handset recall.

Anticipating strong growth in demand, Samsung said it will spend 27 trillion won ($23.7 billion) this year to increase production of OLEDs and an advanced chip.

Looking ahead, Samsung hinted that the worst may be over for its mobile division, forecasting that its mobile profit in the fourth quarter will likely be on a par with last year's.

Lacking a new high-end gadget to fight Apple's new iPhone, Samsung said it will introduce new mid- to low-end handset models while selling the Galaxy S7 and S7 Edge smartphones, which were launched in the spring.

Samsung's founder Lee Byung-chull started out trading rice and dried fish in the late 1930s. The company has grown into an empire providing everything South Koreans need from cradle to grave, from ships and washing machines to insurance and semiconductors. Cheap government financing helped, as South Korea rushed to recover from wartime devastation and catch up with Japan and other developed nations.

The Lee family holds only a minority share in the company, but maintains control through a maze of cross-shareholdings in the 59-odd companies that make up the group.