Samsung has denied that it offered bribes or sought any wrongful favors from the president, but its vice chairman is still being pursued by investigators.

Youkyung Lee
Lee Jae-yong, the vice chairman of Samsung Electronics, center, is questioned by reporters upon his arrival for a hearing at the Seoul Central District Court in Seoul, South Korea, Thursday, Feb. 16, 2017. A South Korean court has begun deliberating on whether to issue an arrest warrant for the Samsung heir accused of offering bribes to the country's president and her close friend. Lee walked into the court on Thursday without speaking.
Choi Jae-gu/Yonhap via AP

SEOUL, South Korea (AP) — The billionaire heir to Samsung, South Korea's most successful and best known conglomerate, made his second attempt Thursday to block efforts by prosecutors to arrest him on bribery and other charges in connection with a corruption scandal that has engulfed the country's president.

A court hearing on whether to issue an arrest warrant for Lee Jae-yong, vice chairman at Samsung Electronics Co., dragged on for more than seven hours behind closed doors at Seoul Central District Court, highlighting how much prosecutors and the Samsung heir have at stake.

Prosecutors, who have less than two weeks to investigate the corruption scandal unless the National Assembly extends their deadline, are making a second and possibly last attempt to arrest Lee, 48.

Lee, groomed since his youth to succeed his father in leading the electronics giant with $177 billion in revenue a year, became Samsung's de facto leader after his father fell ill in 2014.

A decision on whether to issue the arrest warrant will likely be announced early Friday morning. The court's rejection of the prosecutors' first request to arrest Lee in January was announced more than 10 hours after the hearing ended.

Prosecutors have accused Lee of giving bribes worth $36 million to President Park Geun-hye and her long-time friend in order to win government favors for a company leadership transition. They also are investigating Lee on allegations of embezzlement of Samsung funds, hiding assets overseas and lying under oath during a parliamentary hearing.

Samsung has denied that it offered bribes or sought any wrongful favors from the president.

If the court approves the warrant, prosecutors will be able to take him into custody for up to 21 days before formally pressing charges. An approval would also help bring bribery charges against President Park.

Park, whose powers were suspended in December by parliament, is awaiting a decision by the Constitutional Court on whether she will be permanently removed from the presidency.

If the court dismisses the arrest warrant, it will be another blow to prosecutors and the investigation of the scandal could lose momentum.

"If he is arrested, it would be a huge event that could end a deep-seated evil in South Korean society: the collusion between the government and businesses. That would be an enormous positive for the South Korean economy," said Jun Sung-in, a professor of economics at Hongik University in Seoul. "If the arrest is dismissed, it would mean a sabotaging of the investigation by the judiciary. The public will become skeptical about South Korea's judicial system."

Dozens of protesters opposing and supporting Lee's arrest demonstrated outside the courthouse. Some planned to stay all night.

In rejecting the first attempt to arrest Lee last month, the court cited a lack of evidence. It also said prosecutors had not questioned Park, who was named an accomplice in the bribery case.

Lee Kyu-chul, a spokesman for the special prosecution office probing the scandal, said investigators have since strengthened their case with additional evidence.

That includes evidence that Park and Choi Soon-sil, her long-time friend who has been jailed on misuse of power and other charges, spoke several hundred times using cellphones registered under a third party's name.

The president and prosecutors have still not agreed on a schedule for her questioning, but the telephone records for Park and Choi could give weight to the prosecutors' argument.

Samsung was the biggest donor among dozens of South Korean companies that gave a total of nearly $70 million to two non-profit foundations controlled by Choi. Samsung also transferred millions of euros to Choi's company in Germany that financed the equestrian training of Choi's daughter and funded a winter sports center operated by Choi's niece.

Prosecutors suspect that Samsung won government support for a controversial merger of two Samsung groups in 2015 that was a key step in the transition of leadership from father to son.

The merger was opposed by many minority shareholders, who said the deal would hurt them while unfairly benefiting Lee and other members of Samsung's founding family. But Samsung narrowly secured shareholder approval thanks in part to support from the National Pension Fund, its key investor. The current head of the pension fund was indicted last month over his role in pressuring the fund to support the merger.

The special prosecution office is also reportedly looking into whether the value of Samsung Biologics, which went public last year, was overpriced to benefit the Samsung founding family and also whether the fair trade commission gave any favors to Samsung in relation to its complex cross shareholding structure, which allows the Lee family to control the sprawling businesses with only a minority stake.

The court is also considering whether to issue an arrest warrant for Park Sang-jin, a president at Samsung Electronics and head of the Korea Equestrian Federation, who oversaw the company's external relations, including Samsung's contacts with Choi's company in Germany.

Lee's father and ailing Samsung chair Lee Kun-hee has been convicted in the past of embezzlement, tax evasion and breach of trust but was never imprisoned. After his latest conviction in 2008, he was pardoned a year later by the president, who said he would help South Korea's bid to host the 2018 Winter Olympics. 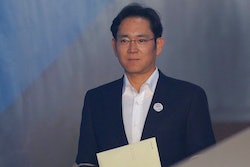 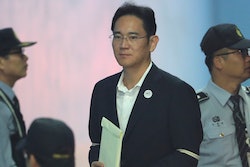 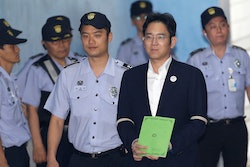