With a price tag of at least $4.4 billion, the guided missile destroyer is perhaps more like a stealthy Rolls-Royce. 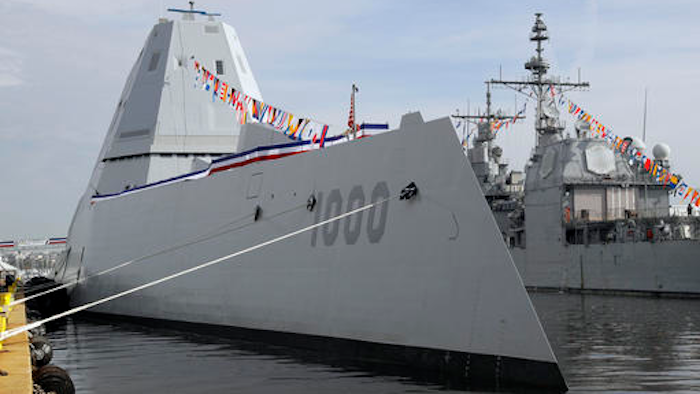 BALTIMORE (AP) — What's a ride like in the Navy's largest and most sophisticated new destroyer? Capt. James Kirk compares it to "a really souped-up sport utility vehicle."

"It's not like a Ferrari, but it's like a very big SUV that is made to go very fast," says Kirk, commanding officer of the futuristic USS Zumwalt that's being commissioned Saturday in Baltimore.

With a price tag of at least $4.4 billion, the guided missile destroyer is perhaps more like a stealthy Rolls-Royce. The company manufactured the ship's propellers and generator sets. The Zumwalt also features an unconventional wave-piercing hull.

"Very smooth," is how Lt. Cmdr. Nate Chase described the ride. "You had no fear of having an open cup of coffee and getting jerked around, like some of these other ships."

Here are some other details about the Zumwalt:

The 610-foot-long warship is sleek, with an angular shape to minimize its radar signature. It looks like a much smaller vessel on radar. Quieter than other ships, the Zumwalt is hard to detect, track and attack. A composite deckhouse hides radar and other sensors. Its powerful new gun system can unload 600 rocket-powered projectiles on targets more than 70 miles away.

Weighing nearly 15,000 tons, the ship's advanced technology and capabilities allow it a range of defensive and offensive missions to project power, wherever it is needed. Kirk says it generates 78 megawatts of power, "enough power to power a medium- to small-sized city." With a motto of Pax Proctor Vim (Peace Through Power), it's unique capability to generate power could be used in ways perhaps not even envisioned yet, such as in the testing and use of laser and directed-energy weapon systems.

With 147 officers and sailors, the Zumwalt's crew is the smallest of any destroyer built since the 1930s, thanks to extensive automation. All sailors are cross-trained, and there's more sharing of tasks on the Zumwalt. Sailors have staterooms, instead of bunk rooms with dozens of people in them. "So, when they wake up, they wake up to only one or two alarm clocks, not four, not 50," Kirk says.

The ship is named after the late Adm. Elmo "Bud" Zumwalt, who earned the Bronze Star in World War II and commanded small boats that patrolled the Mekong Delta in the Vietnam War. He became the youngest chief of naval operations and earned a reputation as a reformer, who fought racism and sexism. "He changed our Navy in massive ways, some to make the fleet a more potent fighting force but most importantly he reformed the institution of the Navy to be more just and fair to all its sailors, making sure that all sailors regardless of race, creed, color, faith, had an opportunity to serve in whatever capacity that their heart and their passion desired to," Kirk said.

On the bridge, there are 180-degree windows and chairs for the ship's captain and executive officer to command the vessel and plenty of video monitors.

Kirk rolls with questions about his sharing the first and last name of the fictional captain of the Starship Enterprise, telling reporters to "live long and prosper." But he says his parents named him after his grandfather, not Capt. James T. Kirk of "Star Trek."

"I have interrogated them about this a great deal — more over the last couple of years than before — and they tell me, no, it was all about my grandfather," Kirk says.