At semester's end, students will pitch their enterprise ideas to venture capitalists and executives in a "Shark Tank" style setting. 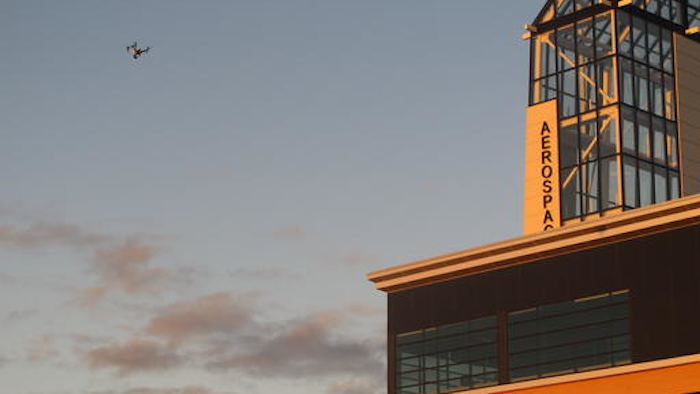 In this Sept. 28, 2016 photo, This drone being flown by University of North Dakota students hovers over an aerospace building in Grand Forks, North Dakota. The flying session was part of the school's first drone business class that is meant to show students what it will take to further their unmanned aircraft careers. One student calls the class a "game-changer" and another believes it will help him launch a drone business.
AP Photo/Dave Kolpack

GRAND FORKS, N.D. (AP) — Instructor Matt Dunlevy probably didn't have to remind his University of North Dakota students that they'd be sharing the airspace as they stood in a field preparing their drones for flight as the sun set one recent afternoon.

"Welcome to the drone business, where you will be eaten alive by bugs," Dunlevy said, as the students swatted away mosquitoes.

What Dunlevy doesn't expect, by the end of the semester, is for students in the new course to be eaten alive trying to make a living in the unmanned aircraft business. They are learning to fly drones, with the hopes of earning a Federal Aviation Administration pilot's license, and are getting real-world business experience. At semester's end, students will pitch their enterprise ideas to venture capitalists and executives in a "Shark Tank" style setting.

Dunlevy told The Associated Press that marketing is currently the most important facet of the fast-growing industry.

"Everything comes down to the market, because that's the battlefield right now," he said. "This course will help the students understand one of the most important megatrends out there."

One of the students, Blaire Beecham, said she discovered a passion for drones late in her collegiate career after bouncing between UND and Texas Christian University. She's due to graduate in May with a degree in general studies and a certificate in entrepreneurship.

"I would say this is a game-changing class for me," Beecham said. "And you have the coolness factor on top of it."

The class has three phases: learning to fly a drone, learning about the drone business, including industry regulations, and developing a business plan.

Beecham's team is working on designing and building a bubble or a shield around drones so they can fly underground or in tunnels.

Nick Allen, who earned his undergraduate degree in mechanical engineering and is pursuing a master's degree based on drone research, wasn't willing to reveal his team's business plan, believing it will turn into a successful company someday. He would only say it involves new applications that don't rely on "the traditional sense of a drone, or what you envision as a drone."

The two primary teachers, Dunlevy and Rick Thomas, have plenty of expertise. Dunlevy is the CEO and president of SkySkopes, which employs about 15 unmanned aircraft pilots who perform tasks such as inspecting power lines, wind turbines and cell towers, as well as land surveying and 3-D modeling. Thomas is a retired senior-level Air Force officer and pilot of the military's largest unmanned aircraft who is a program manager for Northrop Grumman's aerospace division.

The instructors don't have to travel far to find other experts for guest presentations. The area is home to Grand Sky, the nation's first unmanned aircraft business park, and to one of six drone testing sites in the U.S.

Margaret Williams, dean of the business and public administration school, said the inaugural class of 24 students filled up quickly even though it wasn't finalized until a few weeks before the semester started, when regulators said it was OK for the class to fly the aircraft for research purposes. The three-credit course costs about $1,100.

"A lot of people came forward and said, 'I'm not a student; I have my degree, but I really would like to learn about this,'" Williams said. "I am hoping we can develop this into non-degree, non-credit courses — maybe it's offered on the weekend, maybe it's offered online — to give access to more people across the country and around the world."