Oculus VR Will Have Hand Controllers

But they won't be cheap. 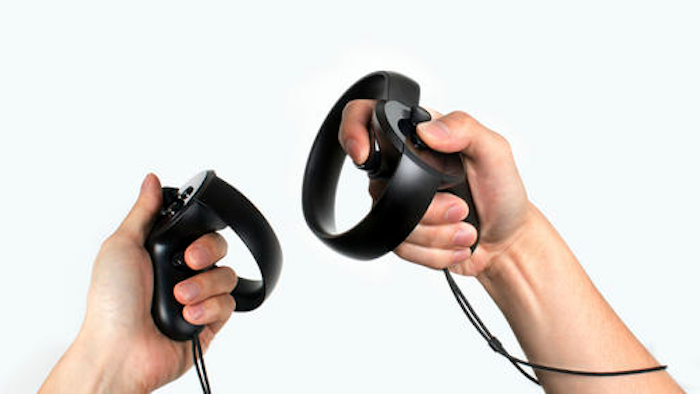 This photo provided by Oculus shows a set of Oculus Touch hand-held controllers, expected to go on sale Dec. 6, 2016. Oculus hopes people find them more comfortable and intuitive to use than traditional video game controllers. Users can make gestures and grasp virtual objects within the simulated worlds projected by Oculus Rift headsets.
Oculus via AP

With a host of leading tech companies now selling VR products, Facebook's Oculus division is hoping to distinguish its offerings with more interactive and social experiences. At an event Thursday, the company announced a long-awaited shipping date — Dec. 6 — for its Oculus Touch hand controllers, designed to let users make gestures and grasp virtual objects within the simulated worlds projected by Oculus Rift headsets.

Facebook CEO Mark Zuckerberg, meanwhile, donned one of those headsets for an onstage demonstration in which he visited Mars, played virtual cards with two other people, then made a video call to his wife while standing in a digital simulation of his living room.

Zuckerberg said his company has invested $250 million to back developers building new games and other virtual-reality programs for Oculus, and is vowing to double that amount. He also said the company is working on a prototype for a mobile VR headset that doesn't have to be linked to a personal computer, which the Oculus Rift requires, while promising a better experience than current headsets powered by smartphones, like those sold by Samsung and Google.

Other Oculus executives showed a host of new virtual-reality games for their platform and new tools for software developers to build programs in which multiple players can interact.

In addition to Zuckerberg, Oculus CEO Brendan Iribe and other company leaders spoke during a two-hour presentation, but co-founder Palmer Luckey did not appear on stage. Luckey recently made a public apology for donating $10,000 to a political group that boasted of creating negative social media posts about Democratic presidential contender Hillary Clinton.

Oculus has been showing prototypes of its Touch hand controllers since last year, but started shipping its high-end virtual-reality headsets without them this spring. Gartner tech analyst Brian Blau said the controllers will let people do more with the Oculus system, which should increase consumer interest.

But they won't be cheap. Oculus will sell a pair of controllers, with a sensor device, for $199. Oculus says they're designed to be more comfortable and intuitive than traditional video game controllers, which can be purchased for less than $50.