Former Indy Racing League driver Sam Schmidt, who is paralyzed from the neck down, is set to receive the first license restricted to an autonomous vehicle in the U.S. 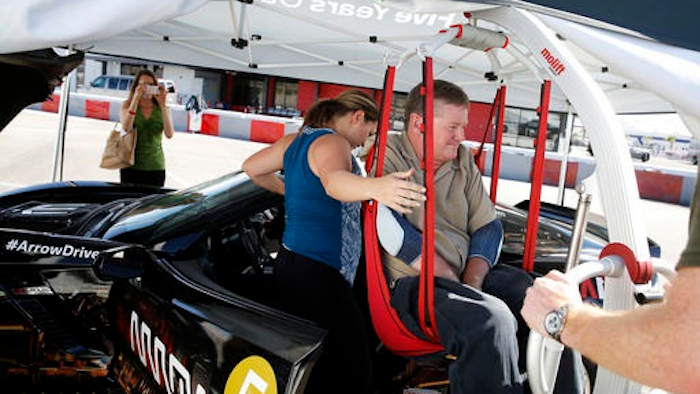 Indy Racing League driver Sam Schmidt exits his modified Corvette on Tuesday, Sept. 27, 2016, in Las Vegas. Schmidt, paralyzed from the neck down in a crash 16 years ago, is set to receive the first autonomous vehicle driver’s license in the U.S.
AP Photo/Isaac Brekken

DETROIT (AP) — Former Indy Racing League driver Sam Schmidt has done a lot in the 16 years since an accident left him paralyzed from the neck down. He runs a racing team and a foundation. He's raced a sailboat using his chin. But the man who raced in the Indianapolis 500 hasn't been able to drive around his neighborhood — until now.

On Wednesday, Schmidt is set to receive the first license restricted to an autonomous vehicle in the U.S. The license allows him to drive on Nevada roads in his specially modified Corvette, which requires no hands on its steering wheel or feet on its pedals. Schmidt uses head motions to control the car's direction.

Fully driverless cars — several steps beyond the car that Schmitt is driving — are expected to reach U.S. roads in the next five to ten years, and the disabled community is eager for their arrival. More than 4 million people in the U.S. need assistance with daily tasks like eating or leaving home, according to the U.S. Census Bureau. Others have less severe disabilities but are still unable to drive.

Disabled people are less likely than the non-disabled to be employed and are more likely to experience poverty, the bureau says. But that could change with the arrival of self-driving cars.

"It's coming. We're looking for something to help us get that level of independence," Schmidt told The Associated Press.

Schmidt is the bridge to that future. His car isn't fully autonomous; it uses four cameras to monitor his head and transmit his movements to the tires. He breathes into a tube to accelerate and sucks the air out when he wants to brake.

The car isn't practical for most people. Centennial, Colorado-based Arrow Electronics bought and modified Schmidt's $80,000 2016 Corvette Z06. It spent an additional six figures on cameras, sensors and computers and even more to add a steering wheel and brake pedals on the passenger side.

Schmidt's license requires that a licensed driver accompany him in the passenger seat to take over in case of emergency. When he drives, Schmidt must follow a pilot car. He can't drive in ice or snow. Those restrictions could eventually be eased, Nevada officials say.

Some in the disabled community would like to move directly to fully self-driving cars which wouldn't require licenses at all, says Henry Claypool, policy director of the Community Living Policy Center at the University of California, San Francisco.

"There are some people who are just so isolated that it really compromises their ability to enjoy their basic civil rights," Claypool said.

But Claypool says it's important to be patient and work with the industry now so when autonomous vehicles do arrive, they're accessible.

"There are real barriers to transportation and we need to be clear about what those are and make sure we leverage the technology to address them," said Claypool, who is wheelchair-bound but drives a $62,000 modified minivan.

Many companies are thinking inclusively. Google has worked closely with the blind while developing its self-driving cars. Tesla Motors has said it's working on an urban transport vehicle that would accommodate wheelchairs. Arrow is working on other projects, including a modified bicycle for a paraplegic athlete.

Arrow is making its design and software freely available in the hope that other companies will build on what it has done. Over the next 18 months, Schmidt hopes to modify a more advanced, semi-autonomous car that could drive itself for short stretches and could help him override potential mistakes. Right now, for example, he could accidentally turn the car if he looks to the side when he means to go straight. A car that was watching the road ahead could correct that.

But for now, the license means an end to 16 years in the passenger seat of a conversion van for trips around town.

"My wife hates driving that van. It makes us look like we're 75 and retired," said Schmidt, 52.

Schmidt is thrilled by the pace of improvement in technology. Within the first year of his partnership with Arrow, in an earlier version of his Corvette, Schmidt completed qualifying laps at the 2014 Indianapolis 500. Earlier this year, he raced to the summit of Pike's Peak.

"Me driving is a lifetime-old problem and these people came together and solved it in seven months," he said. "When you have the right people and the right resources and everyone concentrates on the goal, it gets done."

Schmidt, who co-owns the racing team Schmidt Peterson Motorsports and is chairman of the Conquer Paralysis Now foundation, can hardly narrow the list when asked where he wants to drive first. One stop is the Las Vegas Motor Speedway, where he won a race in 1999. He'd also like to cruise down the Las Vegas strip.

And one simple pleasure: A trip to the drive-thru at In-N-Out Burger.

"It might be kind of fun just to sit there in line with 15 other people," he said.