A treadmill outfitted with 10,000 sensors is combined with unique 3-D gait analysis. 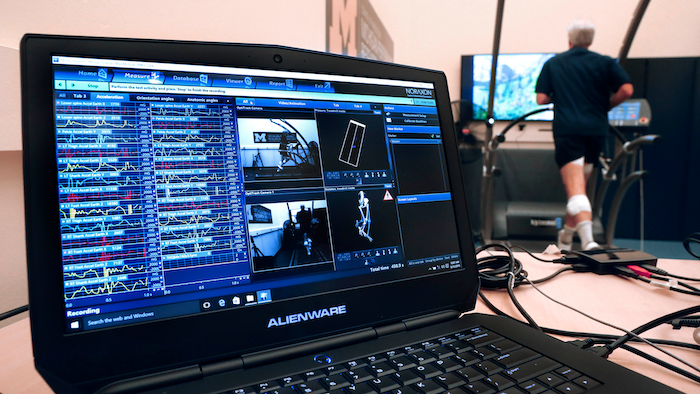 A computer screen shows sensor readouts of David Moran running on a treadmill. The Michigan Performance Research Laboratory, which is part of the School of Kinesiology, is offering runners an in-depth assessment designed to help them improve their form.
AP Photo/Paul Sancya

ANN ARBOR, Mich. (AP) — Some footwear stores videotape a jogger's gait on a treadmill to help determine the kind of running shoe that would be the best fit.

The University of Michigan is taking that practice a few steps beyond.

The School of Kinesiology's Michigan Performance Research Laboratory attaches motion-capture sensors to runners' legs and upper body, has them jog on a treadmill outfitted with 10,000 sensors and does the old-school videotaping. The running-specific assessment that's now available to the public, not just the school's athletes, lasts about two hours and includes in-depth clinical and biomechanical evaluations.

The technology and expertise sets the lab apart, according to Jessica Deneweth Zendler, the director of MiPR (pronounced "my PR").

High school cross country runner Lydia Gilbert was looking to get a leg up on her competition and understand why she's been suffering from nagging shin splints.

Following a clinical examination by Cristine Agresta, a physical therapist and post-doctoral research fellow, the 16-year-old junior from Ann Arbor was outfitted with the sensors and jogged on the treadmill at various speeds. A flat screen displayed a 3-D image of Gilbert's skeleton as she ran.

After, Agresta ran through the preliminary results of the testing, which included footwear, musculoskeletal and postural evaluations as well as footprint pressure and 3-D gait analysis.

"We go through their video, because it's always nice to see yourself in action and it helps confirm that I'm not just making things up," Agresta said, laughing. "People actually believe it when they see it on the video."

Gilbert said she got what she was looking for, predicting the findings will help her feel less pain and hoping it will help her achieve a sub-20-minute 5K time.

"It was very insightful seeing how I can correct my running and how my running was different from how it should be," Gilbert said.

MiPR has offered general sports assessments to the university's varsity athletes since 2012. Starting this spring, the lab geared some toward the public: postpartum, injury, novice and performance. There's a $390 fee for the initial assessment and $85 for a follow-up, charged solely "to cover the time of our people," said Zendler, a biomedical engineer with expertise in orthopedic injury.

David Moran considered it money well-spent. The Michigan law professor and longtime half-marathoner wanted to figure out why he had been feeling numbness in his leg during runs.

Agresta suggested the cause of Moran's discomfort could be compartment syndrome, an exercise-induced muscle and nerve condition, and recommended massage therapy.

"I'm sure a lot of runners have such issues," Moran said.

"I can't say yet whether the treatment plan is going to work. I hope it will," he added.