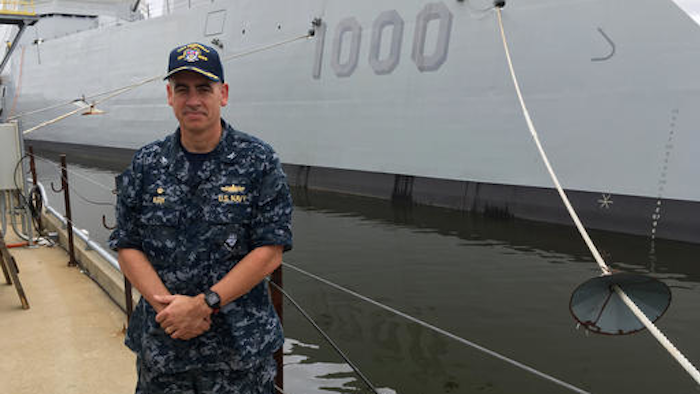 Capt. James Kirk, skipper of the future USS Zumwalt, stands in front of the destroyer at Bath Iron Works on Tuesday, Sept. 6, 2016, in Bath, Maine. The ship is due to depart the shipyard on Wednesday to be commissioned in Baltimore.
AP Photo/David Sharp

BATH, Maine (AP) — The largest and most expensive destroyer ever built for the U.S. Navy once headed to sea in a snowstorm during builder trials. Now, it's heading into the remnants of a tropical storm as it leaves Maine for good.

The skipper is watching the weather as the stealthy Zumwalt destroyer prepares to depart from Bath Iron Works on Wednesday en route to its commissioning in Baltimore, and then to its homeport in San Diego.

The 610-foot futuristic-looking warship features an angular shape to minimize its radar signature, an unconventional wave-piercing hull, a powerful new gun system and a composite deckhouse that hides the radar and sensors.