More revolutionary breakthroughs are expected in the next few years, when measures such as robotic braking systems are supposed to become standard features. 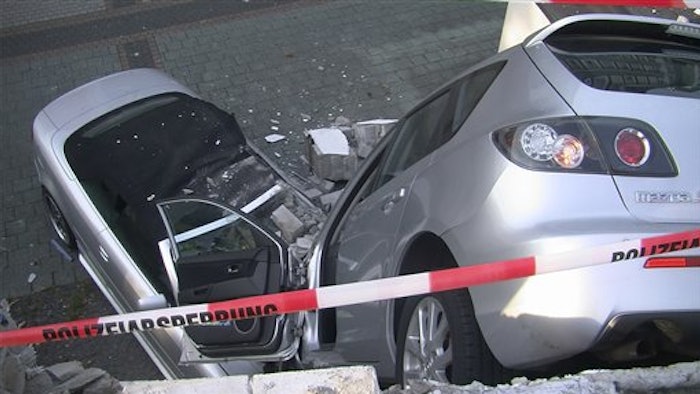 In this Sept. 5, 2016 picture the crash scene in a car park in Bottrop, Germany. An 80-year-old woman took an unintended short cut as she tried to drive her car , right, out of a multistory car park in Germany, breaking though the building’s wall and landing on a parked convertible 3 meters (10 feet) below. Police said that neither the driver nor her 85-year-old husband, who was standing next to the car at the time, were hurt in the accident in Bottrop late Monday.
Daniel Knopp /News-Report-NRW/dpa via AP

SAN FRANCISCO (AP) — Older drivers may soon be traveling a safer road thanks to smarter cars that can detect oncoming traffic, steer clear of trouble and even hit the brakes when a collision appears imminent.

A few of these innovations, such as blind-spot warning systems, are already built in or offered as optional features in some vehicles, primarily in more expensive models.

But more revolutionary breakthroughs are expected in the next few years, when measures such as robotic braking systems are supposed to become standard features in all cars on U.S. roads.

Better technology, of course, can help prevent drivers of all ages from getting into accidents. But those in their 70s and older are more likely to become confused at heavily trafficked intersections and on-ramps. Aging also frequently limits a body's range of motion, making it more difficult to scan all around for nearby vehicles and other hazards. And older drivers tend to be more fragile than their younger counterparts, suffering more serious injuries in traffic accidents.

"Anything that reduces the likelihood or severity of a collision is really a technology that is primed for helping tomorrow's older adults," says Bryan Reimer, research scientist for the Massachusetts Institute of Technology's AgeLab and associate director of the New England University Transportation Center. "We are moving toward an ecosystem where older adults will increasingly be supported by the technology that may help enhance their mobility."

Automakers are rolling out more technology just as the first members of the culture-shifting Baby Boom generation turn 70 this year. By 2030, the U.S. Census Bureau expects there will be nearly 54 million people who are 70 or older living in the country, up from about 31 million in 2014.

About 80 percent of that group is expected to be licensed to drive, based on current trends, and that ratio could rise even higher if technology lets elderly people remain behind the wheel and preserve a sense of independence longer.

The presence of safety technology will be a key consideration for three-fourths of the drivers older than 50 who plan to buy a car in the next two years, according to a recent survey by auto insurer The Hartford and MIT AgeLab. In an indication that priorities are shifting, only one-third of the surveyed 50-and-older drivers who bought a car during the past two years focused on safety technology.

The push to engineer self-driving cars has helped heighten awareness about the role technology can play in eliminating the human error that causes most accidents.

Google, now part of Alphabet Inc., ignited the self-driving car research seven years ago when it began working on autonomous vehicles in a secret laboratory. Now, most automakers and other major technology companies, including Apple and Uber, are also working on self-driving technology, though there is still wide disagreement over when robotic chauffeurs will be ready — and legally cleared — to assume sole responsibility for navigating public roads.

Google aims to have its fully autonomous vehicles cruising around by 2020. That objective is considered too ambitious by many auto industry executives and experts who believe self-driving cars are a decade or more away from becoming a reality.

In the meantime, plenty of other technology should be widely available for older drivers.

Earlier this year, the auto industry vowed to make automated emergency brakes a standard feature by September 2022, but it won't be that long before the technology is widely available. Toyota plans to build it into most models, including its Lexus brand, by the end of next year.

Cameras on a dashboard screen that show what's behind the car have become commonplace in recent years and will be mandatory on all new cars by May 2018. The equipment is expected to be especially helpful for older drivers with a limited range of motion.

Other technology expected to assist older drivers includes automated parking, and adaptive headlights that swivel in the same direction as the steering wheel and adjust the beams' intensity depending on driving conditions and oncoming traffic.

Robotic systems that temporarily assist with highway driving already are available, most notably in Tesla Motors' high end Model S. The electric-car maker released its Autopilot feature last fall, prompting some Model S owners to entrust more of the driving to the robot than Tesla recommends while the system is still in testing mode. For instance, some drivers have posted pictures of themselves reading a newspaper or book with the Model S on Autopilot, or even sitting in the back seat.

In May, an Ohio man was killed when a Model S in Autopilot mode crashed into the side of a tractor-trailer while traveling 9 mph above the speed limit on a highway near Gainesville, Florida. Federal investigators are looking into the cause.

Highly publicized incidents like that may make it more difficult to persuade older drivers to trust the technology coming to their cars.

Older drivers also will need help understanding its benefits and how to use it, says Dale Rife, senior adviser to AARP. To help, AARP is planning to put more focus on car technology in its 37-year-old driver safety programs.