ARLINGTON, Va.—The future of naval engineering was on display last week, as 13 teams of high school and college students did battle at the ninth annual RoboBoat Competition (video below) in Virginia Beach, Virginia.

The competition—sponsored by the Office of Naval Research and the Association for Unmanned Vehicle Systems International Foundation—is a robotics contest where teams program their student-built autonomous surface vehicles to navigate through a series of water-based challenges.

“Every challenge in the competition is designed to mimic real-life maritime missions,” said Kelly Cooper, a program officer in ONR’s Sea Warfare and Weapons Department, Ship Systems and Engineering Research Division. “This competition really tests the engineering design and autonomous capabilities of the boat—as well as helps these students develop the engineering skills needed to be successful in a possible future in the naval research community.” Teams had two mandatory tasks and five missions to complete this year, all having to be done fully autonomously with no human guidance or intervention.

The mandatory tasks demonstrated the quality of each boat design by testing its propulsion, speed, navigation and basic sensing abilities. All of these tasks had to be successfully completed for any mission challenge points to be awarded.

“We know that students want to win, but we hope they find the learning process rewarding as well,” said Cooper. “We want them to walk away with experience and understanding of how their skills can be used to help the Navy, the Marine Corps, the Coast Guard and the nation.”

Autonomous vehicles have grown in importance in recent years, with Chief of Naval Operations Adm. John Richardson stressing the importance of autonomy and unmanned systems in A Design for Maintaining Maritime Superiority.

Recent naval-sponsored programs—including EMILY [Emergency Integrated Lifesaving Lanyard], Sea Hunter, Autonomous Swarmboats and Low-Cost Unmanned Aerial Vehicle Swarming Technology (known as LOCUST)—are just beginning to scratch the surface of the types of support autonomous and unmanned systems will be able to provide to warfighters, from coastal surveillance to water rescues, and from surface warfare to port security and special operations.

“As the science behind autonomous and unmanned systems continues to improve, you will begin to see more autonomous missions which free Sailors and Marines for other tasks and protects them from some of their dangerous duties,” said Cooper. “It’s important that students participating in programs like RoboBoat know that they are a part of that process—they are fostering innovation through competition for the next generation of these types of naval systems.” 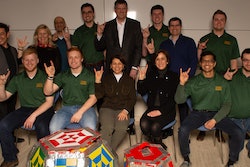 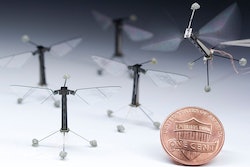 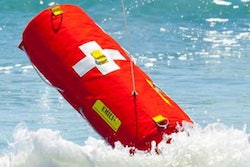 EMILY Robot is a Lifesaver