Imagine a device that is selectively transparent to various wavelengths of light at one moment, and opaque to them the next, following a minute adjustment. 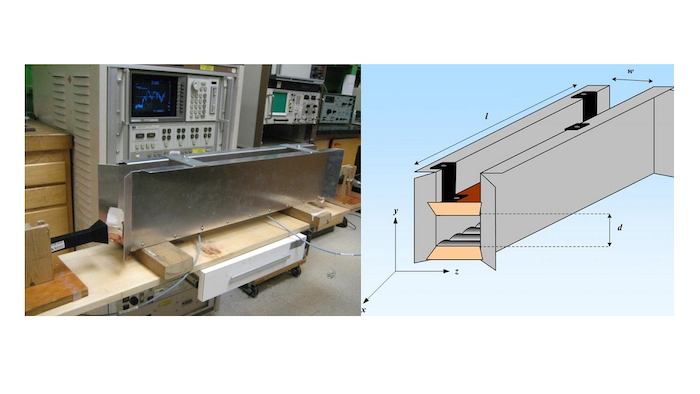 A photograph (left) shows the experimental set-up used to confirm the existence of the Bloch wave resonance, which was first predicted theoretically. An illustration (right) shows the interior of the experimental device, called a hollow periodic waveguide, which consists of two corrugated metallic plates separated by a variable distance of about one inch, and the upper plate can slide with respect to the lower. When researchers shot microwaves between the plates through the air, they were able to control which wavelengths of microwaves were allowed through by varying the position of the upper plate.
Lab of Victor Pogrebnyak/University at Buffalo

Such a gatekeeper would enable powerful and unique capabilities in a wide range of electronic, optical and other applications, including those that rely on transistors or other components that switch on and off.

In a May 20 paper in the journal Physical Review Letters, researchers in the University at Buffalo School of Engineering and Applied Sciences report a discovery that brings us one step closer to this imagined future.

The finding has to do with materials that are periodic, which means that they're made up of parts or units that repeat. Crystals fall into this category, as do certain parts of the wings of butterflies, whose periodic structure helps give them color by reflecting specific colors of light.

Scientists have known since the early 20th century that periodic materials have special qualities when it comes to light. Such materials can reflect light, as butterfly wings do, and if you understand the internal structure of a periodic material, you can use an equation called Bragg's law to determine which wavelengths will pass through the material, and which will be blocked due to reflection.

The new UB study shows that a completely periodic material structure is not needed for this kind of predictable reflection to take place.

Similar effects occur when you sandwich a non-periodic material between two boundary layers of material that have a periodic shape. This set-up will be transparent to certain wavelengths of light and opaque to others, and engineers can quickly alter which wavelengths are allowed through by simply moving one of the periodic boundaries.

Better yet, the effect not only applies to light waves, but rather to a broad range of wave phenomena that span the quantum to the continuum scale.

"We have shown that Bragg's law is a special case of a more generalized phenomenon that was discovered in this study and named as a Bloch wave resonance," said Victor A. Pogrebnyak, an adjunct associate professor of electrical engineering at UB. "This discovery opens up new opportunities in photonics, nanoelectronics, optics and acoustics and many other areas of science and technology that exploit band gap wave phenomena for practical use."

"Electrons behave as waves that can also exhibit a Bloch resonance, which can be used as a powerful method to control currents in nanoelectronic circuits," said Edward Furlani, Pogrebnyak's co-author and a UB professor in the Departments of Chemical and Biological Engineering and Electrical Engineering.

A key advantage that Bloch wave resonance offers: It enables the blocking of a larger range of wavelengths simultaneously than previously known effects described by Bragg's law.

Applications that could take advantage of this broader "band gap" range include white light lasers and a new type of fast-switching transistor.