This is the first U.S. spacecraft designed to return a piece of an asteroid to Earth. 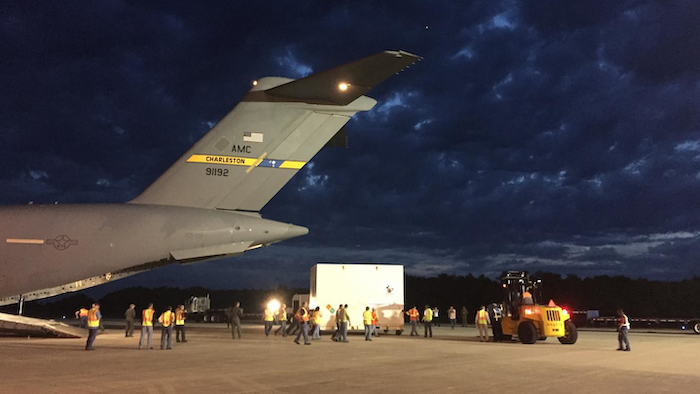 The first U.S. spacecraft designed to return a piece of an asteroid to Earth arrived Friday, May 20, at NASA's Kennedy Space Center in Florida, and has begun final preparations in advance of its September launch.

The Origins, Spectral Interpretation, Resource Identification, Security - Regolith Explorer (OSIRIS-REx) spacecraft will undergo final testing and fueling prior to being moved to its launch pad. The University of Arizona-led mission has a 34-day launch period beginning on Sept. 8.

After launch, the OSIRIS-REx spacecraft will travel to the near-Earth asteroid Bennu and retrieve at least 60 grams (2.1 ounces) of pristine surface material and return it to Earth for study. Scientists expect that Bennu may hold clues to the origin of the solar system and the source of the water and organic molecules that may have made their way to Earth.

"This team has done a phenomenal job of assembling and testing the spacecraft," said Dante Lauretta, principal investigator for OSIRIS-REx at the University of Arizona, Tucson. "As we begin the final preparations for launch, I am confident that this spacecraft is ready to perform its science operations at Bennu. And I can't wait to fly it."

Over the weekend, the team transferred the spacecraft from the shipping container into a cleanroom and performed post-ship inspections to confirm that OSIRIS-REx arrived in good condition. The spacecraft is ready to begin its final round of testing and pre-launch checks, which were scheduled to commence on May 23 with the installation onto a spin balance fixture.

Further checks prior to launch will include software tests, instrument and power functional tests, spacecraft self-tests and deployments of the spacecraft's solar panels.

The spacecraft was transported from Buckley Air Force Base in Aurora, Colorado, on May 20 aboard a U.S. Air Force C-17 cargo plane from the 437th Airlift Wing, Joint Base Charleston, South Carolina. Lockheed Martin Space Systems designed and built the spacecraft in its Littleton, Colorado, facility.

"Delivering OSIRIS-REx to the launch site marks an important milestone, one that's been many years in the making," said Rich Kuhns, OSIRIS-REx program manager at Lockheed Martin Space Systems Company. "The spacecraft has undergone a rigorous environmental test program in Denver, but we still have plenty of work ahead of us. Many on our team have temporarily moved to Florida so they can continue final processing and have the spacecraft ready for the Sept. 8 launch date."

After launch, the OSIRIS-REx spacecraft has an approximately two-year cruise to reach Bennu in 2018. Upon arrival, OSIRIS-REx will spend two years conducting surface mapping and sample site reconnaissance operations before performing the sampling maneuver in 2020. OSIRIS-REx will then deliver the pristine sample of Bennu back to Earth in 2023.

"I'm extremely proud of our team and excited to be shipping the OSIRIS-REx spacecraft to Kennedy Space Center, said Mike Donnelly, OSIRIS-REx project manager at NASA's Goddard Space Flight Center in Greenbelt, Maryland. "We still have a few major milestones to go, but I'm confident that we'll get them done and be ready to launch on time and begin our mission to Bennu."