The Next Sport of the Modern Age: Drone Racing

Welcome to drone racing, a would-be sport in which participants fly remote-controlled drones against competitors at up to 80 miles per hour along looping courses with hairpin curves and drops. 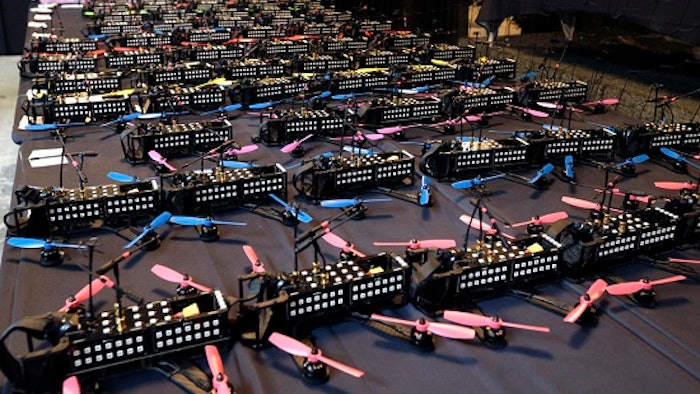 Drones are readied prior to races held by the Drone Racing League at a vacant mall in Hawthorne, Calif. In drone racing, a crash means bits of plastic go flying, a replacement is grabbed, and no harm done. For now, bragging rights are the main stakes. Drone racing leagues would love to follow sports like poker into the mainstream with big TV audiences and sponsorships. But getting sponsors and fans is also a race against time.
AP Photo/Nick Ut

HAWTHORNE, Calif. (AP) — Decked out in high-tech goggles, pilot Steve Zoumas dives low and sees the final gate zooming toward him: a 20-foot-tall metal-framed box ringed with neon. Boom! His sight goes black. The crowd lets out a collective "Whoa!" as pieces of his aircraft, which has just smashed into a concrete barrier, go flying.

Zoumas is just fine, though; it's his drone that's toast. The pilot takes off his goggles and crosses to the pilots' lounge for the replay. Once again his quadcopter drone, a buzzing machine roughly the size of a loaf of bread, zooms daringly around obstacles and through hairpin turns; once again, it meets its demise.

"I was pushing it that lap," says Zoumas, a 31-year-old construction company owner. "I just wanted to put on a show for the crowd."

Welcome to drone racing, a would-be sport in which men, and a few women, fly remote-controlled drones against competitors at up to 80 miles per hour along looping courses with hairpin curves and drops. Many races take place in open fields, but here, racers and spectators have gathered in an abandoned, rubble-strewn mall set up with course-marking gates across two floors.

Racing is a labor of love for many pilots. Many are born tinkerers, and spend hours customizing their drones with new parts or building them from scratch. Some say they've spent more than $10,000 on frames, motors, batteries, propellers and camera mounts.

Fred Loo, a 31-year-old pilot known as "Flying Bear," says he and his wife even put off having kids so he can spend more time racing. He says he'd give up his high-paying Silicon Valley job in a heartbeat if he could figure out how to fly drones for a living.

Of course, that's the sticking point. Drone racing is still something of a guerrilla sport, even though ESPN has agreed to air a drone special on its ESPN3 channel this fall. Money is tight, and most pilots have to keep their day jobs. While high-profile races such as the World Drone Prix, held in Dubai last March, pay out as much as $250,000 to the winning pilot, such affluence feels very distant here in the shell of the Hawthorne Plaza mall.

That could change if drone racing hits it big, attracting a mass audience and the sponsors who want to sell them stuff. Serial entrepreneur Nick Horbaczewski, who founded the Drone Racing League last year, thinks he knows how to pull that off.

The trick, he says, is making the audience feel the same thrill as the pilots. That's why his league lights up each quadcopter and its pilot's goggles with matching colored LEDs, which help spectators track the tiny speeding drones. It's also why pilots wear T-shirts emblazoned with nicknames like "KittyCopter," ''Rekrek" and "Zoomas." Pilot backstories and slick editing build up the drama for videos put online.

The fast-talking 35-year-old helped turn "Tough Mudders," a quirky half marathon in which people pay to slog through artificial quagmires, into a $100-million-plus business as its chief revenue officer. He sank his own money into the drone league last year, though he also raised $8 million from the likes of Miami Dolphins' owner Steve Ross, the talent business Creative Artists Agency and media giant Hearst.

But there's plenty of turbulence ahead. Similarly promising quasi-athletic leagues have crashed and burned before. Take professional paintball, which seemed like a sure-fire winner at its peak in 2005. A sport in which combatants shoot at one another across an obstacle-strewn field promised a built-in audience of gun enthusiasts and video-gamers.

Paintball thrived for several years, airing its own show on ESPN3 and drawing sponsors like Budweiser, Monster energy drinks and the U.S. Army. Then manufacturers of paintball equipment consolidated and cut back on ad spending. Interest in the sport dwindled, and its main league folded in 2014.

Further complicating things, multiple drone-racing leagues are vying for attention. Horbaczewski's major competition is the International Drone Racing Association, which last month announced it'll have a special on ESPN3 in the fall. There are a handful of other big leagues around the world, and grassroots races pop up all the time.

The hodgepodge of organizations has bewildered would-be sponsors, frustrating some who found the experience of backing a race a sinkhole for time and money. Multirotor Superstore, a Santa Cruz, California-based online retailer of drone parts, already sponsors pilots like Loo with discounts and access to new gear at grassroots events.

But owner Michael Silviera says he spent $20,000 sponsoring the IDRA's U.S. National Drone Racing Championships last year, to disappointing results. His company's logos weren't displayed as agreed at an after-party he helped pay for, he says. That would have stung more had promised crowds actually turned up for the event. Attendance was less than 100, although he'd been told to expect 10,000 fans.

"That hurt quite a bit," Silviera says. "Now we're a little hesitant about doing things."

Drone Co. Execs to be Charged with Fraud

May 4th, 2016
Latest in Product Development