As part of the contract awarded in 2011 to design and develop the U.S. Air Force’s next-generation tanker, Boeing has built four test aircraft. 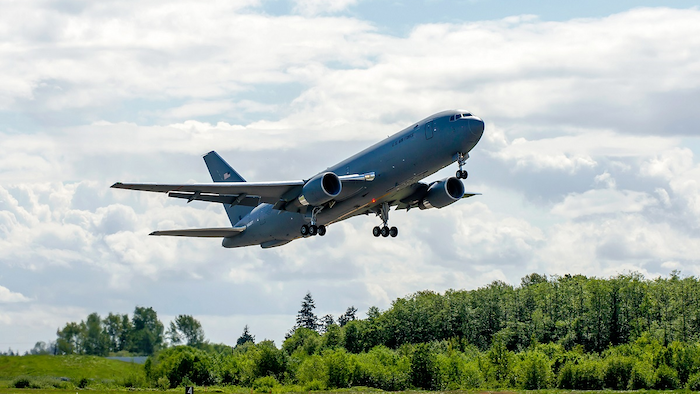 The fourth and final test aircraft for Boeing’s KC-46 tanker program takes off on its first flight from Paine Field in Everett, Wash., on April 25, 2016. The 767-2C will be used to conduct environmental control system testing and will eventually become a KC-46 tanker. Boeing plans to build 179 KC-46 aircraft for the U.S. Air Force.
Tim Stake, Boeing photo

During the 1 hour, 40 minute flight, test pilots performed operational engine checks, flight controls and environmental systems checks and took the 767-2C to a maximum altitude of 39,000 feet prior to landing at Boeing Field, south of Seattle.

The 767-2C is a KC-46 without the aerial refueling system installed.

This aircraft, known as EMD-3, will be used to conduct environmental control system testing, including hot day/cold day testing and smoke penetration testing.

As part of the contract awarded in 2011 to design and develop the U.S. Air Force’s next-generation tanker, Boeing has built four test aircraft – two are configured as 767-2Cs and two as KC-46 tankers. Eventually, both 767-2Cs will become KC-46 tankers.

It will explore the "double-edged sword of computational advances in the public and government sphere."
Nov 23rd, 2020

But are these game-changers safe?
Nov 20th, 2020
Follow Us
Most Recent

Chucking System Has No Air Tubes or Hoses