Sales of SUVs soared 52 percent last year, the only product segment that still is growing in the world's largest market. Sedan sales contracted 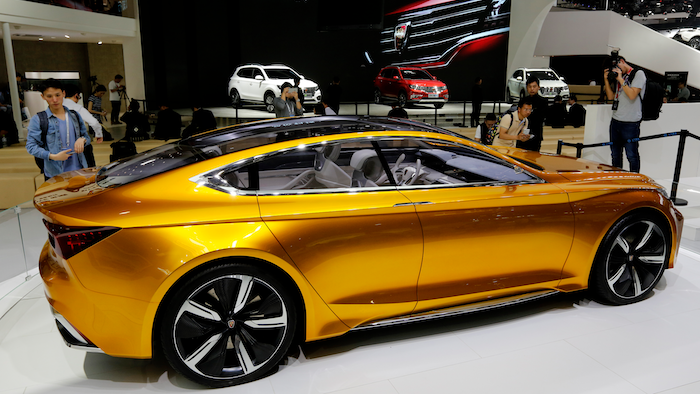 BEIJING (AP) — Automakers are showcasing a new generation of luxurious SUVs at China's biggest auto show of the year as they battle for buyers in the country's cooling, crowded market.

Sales of SUVs, the popular option on China's rough roads, soared 52 percent last year, the only product segment that still is growing in the world's largest market. Sedan sales contracted by 5.3 percent and those of minivans plunged 17.5 percent.

"We're seeing a surge of SUV sales in China," said Renault-Nissan CEO Carlos Ghosn. "In our opinion, this is a trend which is going to continue." The SUV boom is a financial lifeline to the industry and has allowed local brands to claw back market share from global rivals by offering budget-conscious buyers SUVs priced as low as 45,000 yuan ($6,900). But the flood of new models is crowding the market and squeezing products.

As many as 50 new SUVs are due to be launched in China this year by global and Chinese brands, according to research firm IHS Automotive. Already, local manufacturers Great Wall Motor Co. and Changan Automobile Group have been forced to cut prices on their flagship mid-size SUVs.

"The pricing situation is getting tougher," said Joachim Wedler, president of Audi China.

Last year's sales slowdown was sharper than forecast, jolting automakers that see China as the driver of future sales. Still, many see strong growth potential in a market with rising incomes and low vehicle ownership rates. Volkswagen AG, which competes with General Motors Co. for the title of China's most popular auto brand, said first-quarter sales rose 6.4 percent over a year earlier to 950,000.

"I'm optimistic that this trend generally will continue," said Jochem Heizmann, chief executive of VW China. But Beijing and other major cities are trying to curb congestion and smog by limiting new car ownership, which forces automakers to look for buyers in smaller cities where incomes and profits are lower.

Automakers face a "tougher environment," said John Lawler, chairman of Ford Motor Co.'s China unit. "The market is acting much more like a mature market than a developing market and we need to adjust to that," Lawler said. He said automakers will need to pay closer attention to costs and to quickly shifting Chinese consumer tastes.

Market growth is expected to fall further this year, perhaps as low as six percent, after Chinese economic growth fell last year to a 25-year low. Despite that, automakers have announced aggressive plans to expand production. This will "contribute to intensifying competition — and lower returns — across the industry," said Bernstein analyst Robin Zhu in a report.

The popularity of SUVs took off in 2008 and has steadily gathered speed. Last year, they accounted for one-third of sales and industry analysts say that could rise to 50 percent. The fastest-growing segment is low-priced compact and subcompact models from Chinese brands. Their sales rose by an eye-popping 75 percent last year, helping local manufacturers to capture some 65 percent of the SUV market.

On Saturday, Ford unveiled an updated version of its Kuga SUV with an improved engine, entertainment center and other features. Ford also sells the Echosport, Edge, Everest and Explorer SUVs in China.

On Monday, Chinese brand Geely debuted its Emgrand GS SUV, designed by a team led by a Volvo Cars veteran who moved to the Chinese automaker after it bought the Swedish brand in 2010. Chery Automobile Co. displayed the new Tiggo 7, due to go on the market late this year. Previous Tiggos have sold well in Russia and other developing markets. Chery plans to launch a second SUV this year after the Tiggo, said Jin Yibo, a company spokesman.

"The SUV market still has a lot of room to develop. There is demand," said Jin.

Beijing Automotive Industries Corp., one of the biggest state-owned automakers, displayed a half-dozen SUVs, from the bulky, six-seater BJ80 to the compact Senova. Automakers see China's potential as so huge that some set aside strategies of selling the same vehicle worldwide and instead make or modify models to appeal to Chinese tastes.

On Monday, Japan's Mazda debuted its CX-4 SUV, designed for China. For now, it will be sold only in this market, joining the CX-5 in Mazda's SUV lineup. The original off-road brand, Jeep, part of Fiat Chrysler Automobiles, showed off a version of its Renegade due to be manufactured in China.

That will allow Jeep to avoid stiff import taxes and sell at a sharply lower price, expanding its market to younger, lower-income drivers, said Mike Manley, Jeep's chief operating officer. He said the Renegade would cost 143,000 yuan ($22,000) compared with ($46,000) for an imported Cherokee.

Automakers also displayed electric and hybrid sedans and SUVs, which many see as the industry's future, though sales today are tiny.

China overtook the United States last year as the biggest electrics market by number of vehicles sold. Communist leaders see what they call "new energy vehicles," or NEVs, as a promising industry and have supported development with subsidies to manufacturers and to buyers as well as exemption from license fees and other incentives.