Researchers have taken the next step in the evolution of bacteria-powered energy. 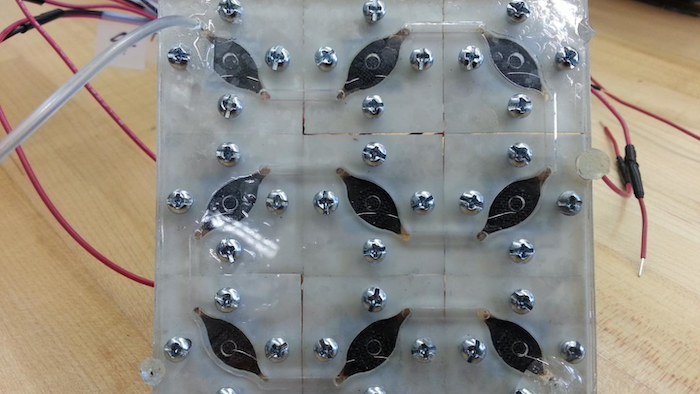 These are nine biological-solar (bio-solar) cells connected into a bio-solar panel. The panel has generated the most wattage of any existing small-scale bio-solar cells, 5.59 microwatts.
Seokheun "Sean" Choi

For the first time ever, researchers connected nine biological-solar (bio-solar) cells into a bio-solar panel. Then they continuously produced electricity from the panel and generated the most wattage of any existing small-scale bio-solar cells - 5.59 microwatts.

"Once a functional bio-solar panel becomes available, it could become a permanent power source for supplying long-term power for small, wireless telemetry systems as well as wireless sensors used at remote sites where frequent battery replacement is impractical," said Seokheun "Sean" Choi, an assistant professor of electrical and computer engineering in Binghamton University's Thomas J. Watson School of Engineering and Applied Science, and co-author of the paper.

Choi is the corresponding author of the paper "Biopower generation in a microfluidic bio-solar panel," which reported the findings.

"This research could also enable crucial understanding of the photosynthetic extracellular electron transfer processes in a smaller group of microorganisms with excellent control over the microenvironment, thereby enabling a versatile platform for fundamental bio-solar cell studies," said Choi.

Xuejian Wei, a graduate student in the department, and Hankeun Lee '15, who will graduate from Binghamton in May, were also authors of the study.

The current research is the latest step in using cyanobacteria (which can be found in almost every terrestrial and aquatic habitat on the planet) as a source of clean and sustainable energy.

Last year, the group took steps toward building a better bio-solar cell by changing the materials used in anodes and cathodes (positive and negative terminals) of the cell and also created a miniature microfluidic-based single-chambered device to house the bacteria instead of the conventional, dual-chambered bio-solar cells.

However, this time the group connected nine identical bio-solar cells in a 3x3 pattern to make a scalable and stackable bio-solar panel. The panel continuously generated electricity from photosynthesis and respiratory activities of the bacteria in 12-hour day-night cycles over 60 total hours.

"Bio-solar cell performance has improved significantly through miniaturizing innovative device architectures and connecting multiple miniature cells in a panel," the report said. "This could result in barrier-transcending advancements in bio-solar cells that could facilitate higher power/voltage generation with self-sustainability, releasing bio-solar cell technology from its restriction to research settings, and translating it to practical applications in real-world."

Even with the breakthrough, a typical "traditional" solar panel on the roof of a residential house, made up of 60 cells in a 6x10 configuration, generates roughly 200 watts of electrical power at a given moment. The cells from this study, in a similar configuration, would generate about 0.00003726 watts.

So, it isn't efficient just yet, but the findings open the door to future research of the bacteria itself.

"It is time for breakthroughs that can maximize power-generating capabilities/energy efficiency/sustainability," Choi said. "The metabolic pathways of cyanobacteria or algae are only partially understood, and their significantly low power density and low energy efficiency make them unsuitable for practical applications. There is a need for additional basic research to clarify bacterial metabolism and energy production potential for bio-solar applications."

The findings are currently available online and will be published in hard copy in the June edition of the journal Sensors and Actuators B: Chemical.