NC WARN is appealing a decision to hit the group with nearly $60,000 in fines because the agreement violated the state's system of legal electricity monopolies. 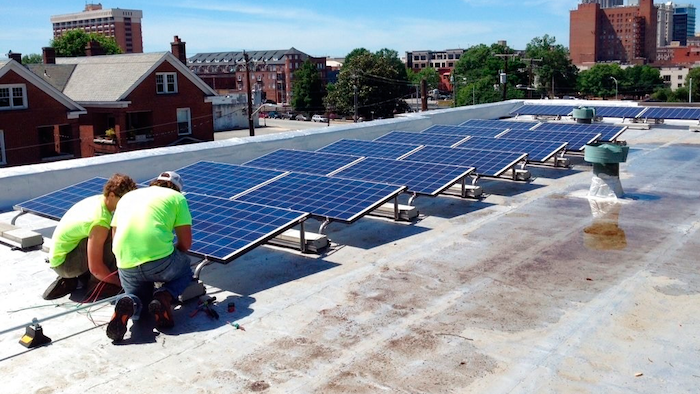 In this June 3, 2015 photo made available by NC WARN, workers install a solar power system on the roof of Faith Community Church in Greensboro, NC. The installation and the electricity the panels generated prompted a dispute being considered by the North Carolina Supreme Court that will be heard on Tuesday, April 17, 2018. State utilities regulators have ruled the group that funded the $20,000 cost of the solar panels violated state law protecting regulated monopoly electric utilities was illegally producing electricity "for the public." The group, NC WARN, says it was an allowable private power agreement with the church alone.
NC WARN via AP

RALEIGH, N.C. (AP) — North Carolina's highest court is deciding whether a clean-energy advocacy group illegally sold solar power to a church as part of its plan to undercut the monopoly of the state's electric utilities.

The state Supreme Court listened Tuesday as lawyers offered differing descriptions of a 2015 deal in which the group NC WARN installed solar panels atop Faith Community Church in Greensboro and the church agreed to pay below-market rates for the power. NC WARN described it as an effort to expand solar power faster than Duke Energy Corp., which has the largest state-approved monopoly turf.

The country's No. 2 electricity company, the state's utilities regulator and other power companies say NC WARN is producing electricity "for the public," which would mean it's intruding on the protected territory of the publicly regulated monopoly utilities. NC WARN's lawyers contend they aren't selling to the public, only helping nonprofits save money with clean energy.

"NC WARN is not interested in selling power. NC WARN is engaged in an altruistic program designed to combat the climate crisis," the group's attorney, Matthew Quinn, told the court's seven justices.

To accomplish that goal, NC WARN planned to offer financing to nonprofits that wanted to install rooftop solar systems, starting with the Greensboro church, Quinn said. But the court shouldn't consider the broader picture, Quinn said, which involves only a private contract for one location and "having no regulatory ramifications to the public."

The justices focused on that seeming contradiction and others in the group's argument.

"Part of this project is to do multiple replications of this approach. So to say, 'well it's just one,' what about the next one?" Justice Paul Newby asked.

The judge also questioned how NC WARN could claim it wasn't selling electricity to the church, when the contract was called a power purchase agreement.

"It seems to me you're wanting us to ignore the expressed language of the agreement," Newby said.

NC WARN is appealing a North Carolina Utilities Commission decision to hit the group with nearly $60,000 in fines because the agreement violated the state's system of legal electricity monopolies.

Supporters argue designating and regulating companies as the only electricity provider in specific territories has led to power being available to virtually everyone in North Carolina, around the clock, and at rates below the national average.

But if NC WARN's deal with the church is allowed, it could allow competitors to move in and install solar units on high-profit, energy-intensive customers and siphon revenues away from Duke Energy, Dominion Energy and other utilities, opponents said. That would leave a smaller number of customers paying for all the power plants, transmission lines and repair crews needed to run a modern electrical system, said Robert Josey Jr., an attorney for the state's official utilities consumer advocate.

"This is not altruistic. This is a goal by NC WARN to get into the utilities business on an unregulated basis," Duke Energy attorney Dwight Allen said. "It's almost exploitive."