Mechanical engineer develops paperlike battery electrode that may improve everything from drones to space exploration. 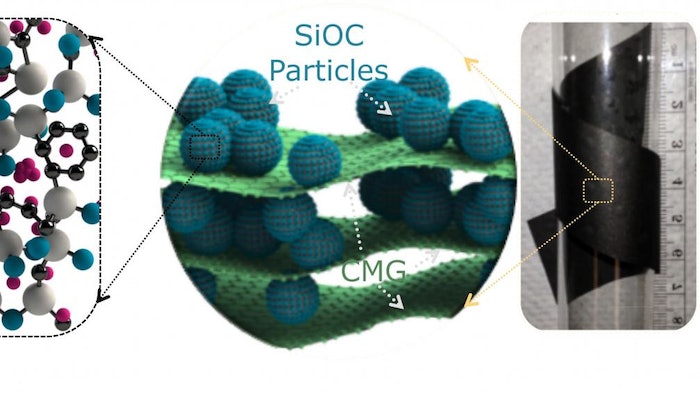 The battery electrode has all the right characteristics. It is more than 10 percent lighter than other battery electrodes. It has close to 100 percent cycling efficiency for more than 1000 charge discharge cycles. It is made of low-cost materials that are byproducts of the silicone industry. And it functions at temperatures as low as minus 15 degrees C, which gives it numerous aerial and space applications.

Singh's research team has been exploring new material combinations for batteries and electrode design. It has been difficult to incorporate graphene and silicon into practical batteries because of challenges that arise at high mass loadings — such as low capacity per volume, poor cycling efficiency and chemical-mechanical instability.

Singh's team has addressed these challenges by manufacturing a self-supporting and ready-to-go electrode that consists of a glassy ceramic called silicon oxycarbide sandwiched between large platelets of chemically modified graphene, or CMG.

"The paperlike design is markedly different from the electrodes used in present day batteries because it eliminates the metal foil support and polymeric glue — both of which do not contribute toward capacity of the battery," Singh said.

The design that Singh's team developed saved approximately 10 percent in total weight of the cell. The result is a lightweight electrode capable of storing lithium-ion and electrons with near 100 percent cycling efficiency for more than 1000 charge discharge cycles. The most important aspect is that the material is able to demonstrate such performance at practical levels, Singh said.

The paper electrode cells also are able to deliver a capacity of 200 miliampere-hour per gram even when kept at minus 15 degrees C for about a month, which is quite remarkable considering that most batteries fail to perform at such low temperatures, Singh said.

"This suggests that rechargeable batteries from silicon-glass and graphene electrodes may also be suitable for unmanned aerial vehicles flying at high altitudes, or maybe even space applications," Singh said.

The silicon oxycarbide material itself is quite special, Singh said. It is prepared by heating a liquid resin to the point where it decomposes and transforms into sharp glasslike particles.

The silicon, carbon and oxygen atoms get rearranged into random 3-D structure and any excess carbon precipitates out into cellular regions.

Such an open 3-D structure creates large sites for reversible lithium storage and smooth channels for lithium-ion transportation. This structure and mechanism of lithium storage is different than crystalline silicon electrodes.

Silicon oxycarbide electrodes are expected to be low cost because the raw material — liquid resin — is a byproduct of the silicone industry.

Moving forward, Singh and his team want to address practical challenges. Singh's goal is to produce this electrode material at even larger dimensions.

For example, present-day pencil-cell batteries use graphite-coated copper foil electrodes that are more than one foot in length. The team also would like to perform mechanical bending tests to see how they affect performance parameters.

"Ultimately, we would like to work with industry to explore production of lithium-ion battery full-cells," Singh said. "Silicon oxycarbide can also be prepared by 3-D printing, which is another area of interest to us."

The research received funding from the National Science Foundation, including Singh's $500,000 CAREER award.