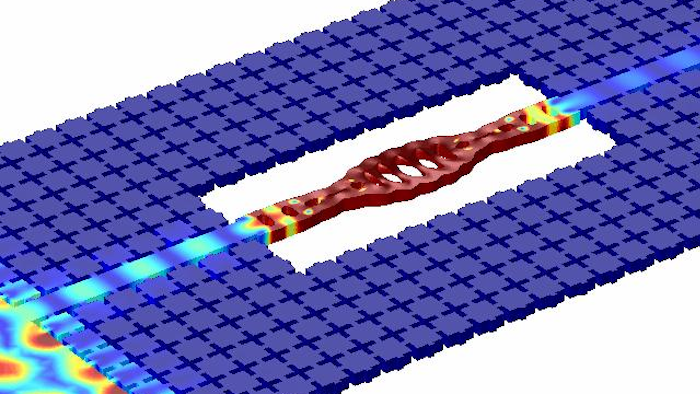 Researchers working at the National Institute of Standards and Technology (NIST) have developed a piezo-optomechanical circuit that converts signals among optical, acoustic and radio waves. A system based on this design could move and store information in next-generation computers.

The team's work, published in Nature Photonics, was also presented at the March 2016 meeting of the American Physical Society in Baltimore.

While Moore's Law, the idea that the number of transistors on an integrated circuit will double every two years, has proven remarkably resilient, engineers will soon begin to encounter fundamental limits. As transistors shrink, heat and other factors will begin to have magnified effects in circuits. As a result, researchers are increasingly considering designs in which electronic components interface with other physical systems that carry information such as light and sound.

Interfacing these different types of physical systems could circumvent some of the problems of components that rely on just one type of information carrier, if researchers can develop efficient ways of converting signals from one type to another (transduction).

For example, light is able to carry a lot of information and typically doesn't interact with its environment very strongly, so it doesn't heat up components like electricity does. As useful as light is, however, it isn't suited to every situation. Light is difficult to store for long periods, and it can't interact directly with some components of a circuit. On the other hand, acoustic wave devices are already used in wireless communications technology, where sound is easier to store for long periods in compact structures since it moves much more slowly.

To address such needs, NIST researchers and their collaborators built a piezoelectric optomechanical circuit on a chip. At the heart of this circuit is an optomechanical cavity, which in their case consists of a suspended nanoscale beam. Within the beam are a series of holes that act like a hall of mirrors for light (photons).

Photons of a very specific color or frequency bounce back and forth between these mirrors thousands of times before leaking out. At the same time, the nanoscale beam confines phonons, that is, mechanical vibrations, at a frequency of billions of cycles per second (gigahertz or GHz). The photons and phonons exchange energy so that vibrations of the beam influence the buildup of photons inside the cavity, while the buildup of photons inside the cavity influences the size of the mechanical vibrations. The strength of this mutual interaction, or coupling, is one of the largest reported for an optomechanical system.

One of the researchers' main innovations came from joining these cavities with acoustic waveguides, which are components that route sound waves to specific locations. By channeling phonons into the optomechanical device, the group was able to manipulate the motion of the nanoscale beam directly. Because of the energy exchange, the phonons could change the properties of the light trapped in the device. To generate the sound waves, which were at GHz frequencies (much higher than audible sounds; not even your dog could hear them), they used piezoelectric materials, which deform when an electric field is applied to them and vice versa.

By using a structure known as an "interdigitated transducer" (IDT), which enhances this piezoelectric effect, the group was able to establish a link between radio frequency electromagnetic waves and the acoustic waves. The strong optomechanical links enable them to optically detect this confined coherent acoustic energy down to the level of a fraction of a phonon.

They also observed controllable interference effects in sound waves by pitting electrically and optically generated phonons against each other. According to one of the paper's co-authors, Kartik Srinivasan, the device might allow detailed studies of these interactions and the development of phononic circuitry that can be modified with photons.

"Future information processing systems may need to incorporate other information carriers, such as photons and phonons, in order to carry out different tasks in an optimal way," says Srinivasan, a physicist at NIST's Center for Nanoscale Science and Technology. "This work presents one platform for transducing information between such different carriers."