State transportation departments are increasingly studying the use of drones for everything from inspecting bridges to clearing car accidents. 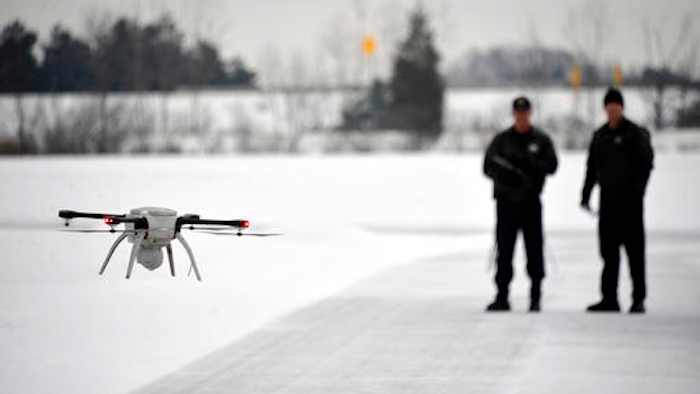 In this Jan. 15, 2015, file photo, Michigan State Police Sgt. Matt Rogers and Trooper Don Zinz bring the Aeryon SkyRanger in for a landing during a demonstration of the new Unmanned Aircraft System at the State Police training track in Dimondale, Mich. State transportation departments across the country are increasingly studying the use of unmanned aerial vehicles, better known as drones, for everything from inspecting bridges to helping clear car accidents.
Dale G. Young/Detroit News via AP, File

BOSTON (AP) — That buzzing sound overhead may soon signal the arrival of the 21st-century version of a guy in a hardhat and bucket truck.

State transportation departments are increasingly studying the use of drones for everything from inspecting bridges to clearing car accidents.

Michigan transportation officials are set to begin a two-year study. Minnesota has tested a drone to help conduct safety inspections of bridges. Vermont is using federal grant dollars to study the use of drones to monitor river flooding and figure out how much material is needed to fix roads.

And in Massachusetts, a group has also been looking at the pros and cons of drone use, from potential threats to their possible use surveying construction projects.

The states are among 33 that have studied or used drones, helped develop drone polices, or aided in drone research.

That's according to a new survey by the American Association of State Highway and Transportation Officials, which represents departments of transportation in all 50 states, Washington, D.C., and Puerto Rico.

The Michigan study is part of a longer review.

In 2014, state transportation officials there conducted a study with the Michigan Tech Research Institute that found drones potentially useful for a range of transportation tasks, from assessing bridge decks and monitoring traffic to processing thermal data and inspecting confined spaces.

"A traditional bridge inspection for example typically involves setting up work zones, detouring traffic and using heavy equipment," Cook said in a statement. "(Drones) can get in and get out quickly."

Michigan officials estimate that a standard bridge deck inspection takes eight hours, a crew of four people and heavy equipment at a cost of about $4,600. The same inspection with a drone takes two people just two hours at an estimated cost of about $250.

At the University of Vermont, researchers using federal grant money are developing programs to let drones estimate how much fill it will take to repair a damaged roadway by feeding images collected from above the site through a computer program.

The Massachusetts group includes representatives from the Massachusetts Department of Transportation Aeronautics Division, as well as the attorney general's office and the state highway division — an acknowledgement that drones and airplanes don't always mix.

Pilots are increasingly worried about drones operating too close to airports or in flight paths, fueling fears of a midair collision.

A report released last year counted at least 241 reports of close encounters between drones and manned aircraft, including 28 in which pilots had to veer out of the way.

Massachusetts officials say that while they're exploring how to develop workplace applications for drones, they also need to work with the Federal Aviation Administration to resolve statutory and regulatory issues.

All drone testing must be approved by the FAA.

According to the AASHTO survey, several states have said the application process to research drones can take months.

The FAA has already been looking ahead to a time when drones are routinely employed for bridge inspections and other uses.

FAA Administrator Michael Huerta said at the time that the agency was trying to be flexible and maintain safety "without placing an undue regulatory burden on an emerging industry."

The proposed rules would require commercial operators to pass a knowledge test and federal security check. Operators would have to keep drones within eyesight.

Cases of flyaway drones getting stuck in trees or hitting buildings have soared.

Last year, a drone that its operator lost control of flew over the White House fence and crashed on the lawn before Secret Service agents could block it.

New federal regulations for commercial drone testing could be released this summer.

Low concentrations could be identified from acid mine drainage and other waste sources.
Sep 20th, 2021