The fibers can transport charges at speeds of 1 billion electrons per second. 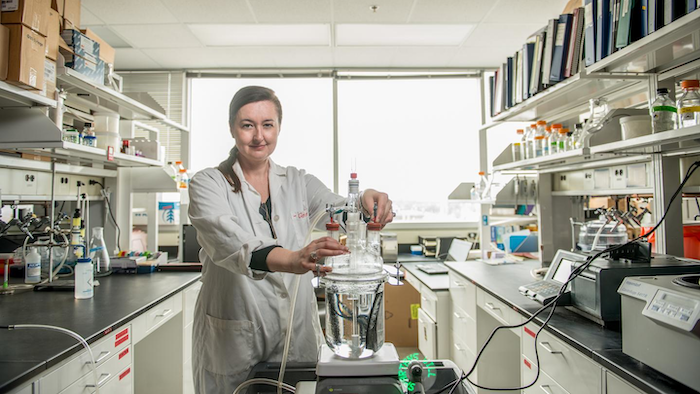 A microbial protein fiber discovered by a Michigan State University scientist transports charges at rates high enough to be applied in manmade nanotechnologies.

The discovery, featured in the current issue of Scientific Reports, describes the high-speed protein fiber produced by uranium-reducing Geobacter bacteria. The fibers are hair-like protein filaments called "pili" that have the unique property of transporting charges at speeds of 1 billion electrons per second.

"This microbial nanowire is made of but a single peptide subunit," said Gemma Reguera, lead author and MSU microbiologist. "Being made of protein, these organic nanowires are biodegradable and biocompatible. This discovery thus opens many applications in nanoelectronics such as the development of medical sensors and electronic devices that can be interfaced with human tissues."

Since existing nanotechnologies incorporate exotic metals into their designs, the cost of organic nanowires is much more cost effective as well, she added.

How the nanowires function in nature is comparable to breathing. Bacterial cells, like humans, have to breathe. The process of respiration involves moving electrons out of an organism. Geobacter bacteria use the protein nanowires to bind and breathe metal-containing minerals such as iron oxides and soluble toxic metals such as uranium. The toxins are mineralized on the nanowires' surface, preventing the metals from permeating the cell.

Reguera's team purified their protein fibers, which are about 2 nanometers in diameter. Using the same toolset of nanotechnologists, the scientists were able to measure the high velocities at which the proteins were passing electrons.

"They are like power lines at the nanoscale," Reguera said. "This also is the first study to show the ability of electrons to travel such long distances - more than a 1,000 times what's been previously proven -- along proteins."

The researchers also identified metal traps on the surface of the protein nanowires that bind uranium with great affinity and could potentially trap other metals. These findings could provide the basis for systems that integrate protein nanowires to mine gold and other precious metals, scrubbers that can be deployed to immobilize uranium at remediation sites and more.

Reguera's nanowires also can be modified to seek out other materials in which to help them breathe.

"The Geobacter cells are making these protein fibers naturally to breathe certain metals. We can use genetic engineering to tune the electronic and biochemical properties of the nanowires and enable new functionalities. We also can mimic the natural manufacturing process in the lab to mass-produce them in inexpensive and environmentally friendly processes," Reguera said. "This contrasts dramatically with the manufacturing of manmade inorganic nanowires, which involve high temperatures, toxic solvents, vacuums and specialized equipment."

This discovery came from truly listening to bacteria, Reguera said.

"The protein is getting the credit, but we can't forget to thank the bacteria that invented this," she said. "It's always wise to go back and ask bacteria what else they can teach us. In a way, we are eavesdropping on microbial conversations. It's like listening to our elders, learning from their wisdom and taking it further."