Ideas such as robots for the elderly and supersonic public transportation — rather than the usual hot app or startup launch — have taken the spotlight. 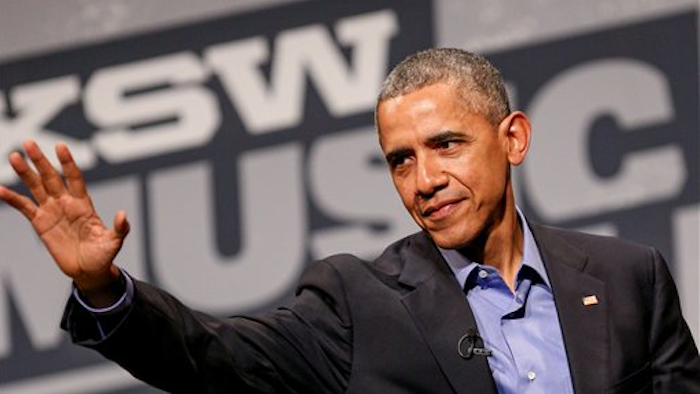 President Barack Obama speaks during the opening day of South By Southwest at the Long Center for the Performing Arts on Friday, March 11, 2016, in Austin, Texas.
Rich Fury/Invision/AP

President Barack Obama's opening keynote on Friday referenced the current fight between Apple and the FBI and set an issue-driven tone for the conference. And a daylong online harassment summit put the spotlight on the troubling topic of online harassment . Meanwhile, panels focused on futuristic ideas such as robots for the elderly and supersonic public transportation.

So far, though, there's no sign of breakout apps like Twitter in 2007 or Foursquare in 2009. (Or livestreaming app Meerkat last year, which was quickly eclipsed by Twitter's Periscope.)

"This year's festival has been more about connectivity, immersive experiences and external, larger issues rather than past years, which were more about new launches," said SXSW veteran Tom Edwards, chief digital officer for Dallas-based marketing firm Epsilon.

More than 30,000 attendees flooded the streets of downtown Austin over the weekend, soaking up live music and marketing stunts including a life-size Ferris wheel provided by the USA Network show "Mr. Robot."

Here's a look at the buzziest trends so far at the festival's tech-focused conference, which runs through Tuesday.

It's an election year, and hotly debated issues dominated discussions.

Obama, the first U.S. president to headline a SXSW event, said he was strongly committed to encryption but said authorities must be able to access data held on electronic devices to fight crime and extremist violence. He didn't specifically comment on the FBI's case against Apple, however. A federal court has ordered Apple to help the FBI break into a phone used by one of the San Bernardino killers. Apple has appealed the ruling and says the government plan puts the privacy of all users at risk.

Panels on online harassment discussed trolling and abuse in online comments and social media, mainly of women. One panel gave statistics and examples of the harassment women of color and female journalists face to illustrate the scope of the problem on social media.

Another panel, initially canceled due to threats of violence against panelists and the festival, discussed how game-related design, such as algorithms or pre-set filters, could be used to discourage harassment. Due to the previous threats, the daylong online harassment summit took place under tight security, but there were no disturbances.

The festival had its own mini-discrimination controversy. Organizers apologized to a panelist after she tweeted that she was told she had to remove her headscarf for a festival ID badge. She was eventually allowed to take a photo with her headscarf — then received a badge with the right picture but the wrong name and affiliation, as her tweets documented and the festival confirmed.

Rodney Brooks, creator of Roomba and CEO of Rethink Robots, argued that robots aren't as dangerous as people think they are. At one point, he reached into his pocket and pulled out a coin — then noted that no robot is currently capable of doing the same.

Still, the robotics pioneer thinks robots will be essential for elder care, helping with daily tasks, acting as companions and driving people around. In similar respects such as manufacturing, he argued, robots won't displace jobs, they'll do the work no one wants to do.

Dirk Ahlborn, CEO of Hyperloop, a company aiming to create a transportation system using capsules traveling through tubes at the speed of sound, took the stage to enthusiastic whoops from the crowd. He said the Hyperloop, which he claims will condense a five-hour trip from Los Angeles to San Francisco to 36 minutes for less than the cost of a plane ticket, is well on the way to becoming reality.

While he acknowledged critics who say the project could cost $100 billion to build — far more than Hyperloop's own estimates — he said his company is trying to disrupt the transportation industry.

As always, tech and music intermingled during the festival. When the indie-rock band Great Caesar played at a popular local bar, it was no ordinary SXSW show. Its sponsor, Doppler, was testing ear buds designed to augment live music. Via an app, ear bud wearers could adjust the bass they could hear, for example, or create an echo effect. They could also choose pre-mixed filters that mimic the sound effects of different places, such as a small studio or Carnegie Hall.

"I like having some kind of control over what I'm listening to," said Marshall Heinz, a law student in Austin who tried out the device. "I make music, so to interact with people who are way better musicians than me is pretty cool."

Sony had one of the buzziest product demos of the festival, previewing a prototype device called the "N'' concept neckband. It's a speaker that rests on the neck, plays music, takes pictures and responds to voice commands such as queries about the weather. Response to the device, unveiled Saturday, has been enthusiastic, said research and development deputy president Jun Maruo, who said there's no timeline for when Sony might release the neck band or what it might cost.

How Does Water Behave in Space?