National Institute of Standards and Technology (NIST)
The new breast phantom consists of two components. The one at left is designed to provide a standard for measuring proton spin relaxation time, which varies with different kinds of tissue. The one at right provides references for imaging diffusion.
NIST/PML

A little over three years ago, NIST scientist Katy Keenan came back from a conference with an ambitious idea: to improve the quality of magnetic resonance imaging (MRI) for breast-cancer screening by creating a breast-tissue mimic, or “phantom,” that would allow users to test the accuracy of their imaging systems against a NIST-traceable standard.

This month, the first commercial breast phantoms are being shipped to buyers here and abroad.

What happened in the interim is indicative of the way NIST works collaboratively with the private sector through the federal Small Business Innovation Research* program.

MRI – which provides invaluable diagnostic information, especially about soft tissues – is increasingly prevalent and evolving rapidly. But there are no universal standards for evaluating MRI systems’ quantitative performance. As a result, it is hard to compare images of the same patient taken on two different systems, or images taken on the same system over a span of months.

Researchers in the Biomagnetic Imaging program at NIST’s Boulder, Colo., campus have been working on that problem for years, producing a system phantom for overall imaging calibration, and a diffusion phantom to assess imaging of water-molecule flow in tissues in real time.

A breast phantom poses a uniquely different set of challenges because the contents have to mimic distributions of fat and fibroglandular tissue, and the phantom has to be shaped to fit into conventional breast imaging coils.

In 2014, HPD applied for a NIST SBIR grant to refine the phantom prototype and was awarded $90,000 for a six-month period. “Much of the effort focused on manufacturabilty for a price point around $5,000-$6000 per unit,” says Elizabeth Mirowski of HPD, “as well as shelf stability of the tissue mimics inside. The original mimics were based on chemicals procured from agriculture, which can have significant variation due to terroir and season of growth, [and] which does not support reproducible standardization. We developed new mimics from commercial-grade chemicals of high purity.”

Six months ago, HPD was awarded a two-year Phase II SBIR grant to complete the project. The latest iteration of the phantom, pictured above, includes further improvements to the design. Five units are on their way to U.S. and foreign customers. In addition, the phantom is slated for use in a large, multi-site clinical trial studying alternative breast-cancer therapies.

“We’re working with HPD to develop the third stage now,” Keenan says. “The next steps will address two significant issues. One is thermometry. Diffusion is affected by temperature, so the phantom will require some sort of internal thermometer.” The second issue is development of software to automatically analyze the large volume of data generated. “In imaging an object of this volume, you’ll generate in the neighborhood of 100 to 300 images,” Keenan says. “Then somebody has to go through all of those and select the appropriate regions of interest. And sometimes you want to combine images from multiple slices to get volume. That’s incredibly time-consuming. And it limits the utility of the phantom in a quality-control system.”

HPD is at work on the software and further material improvements. NIST’s role will be in providing precision measurements. “The key advancement here is NIST traceability going inside these objects,” says project head Steve Russek. “The kinds of measurements required are not something the companies could handle on their own. In addition, there’s more to the process than just selling units. It’s monitoring them for five years or longer” to see how consistent the results are.

“From our perspective,” Russek says, “getting the phantoms out is just the beginning. What we really want to do is get involved in clinical trials that collect data. We need to understand what the errors are in the measurements, how precise they are, and how we can get them to be more precise.

“Ideally, we’d like to get a snapshot of the whole imaging infrastructure in the United States, see how accurate it is, how variable from site to site. You might think that people would know how things vary across the country, how precise the measurements are and how effective different protocols are. But there really isn’t a coherent system to monitor that. Medical institutions have their hands full with patients. So it’s a very good job for NIST.”

* SBIR is a highly competitive program that provides grant money to encourage domestic small businesses to engage in Federal Research/Research and Development (R/R&D) that has the potential for commercialization. 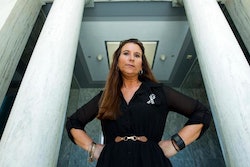